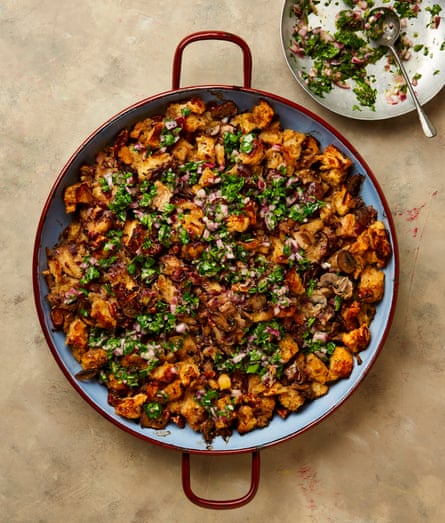 A festive “last minute” is not quite the same as a Monday night “last minute”. Agreed?! A festive last minute means that you’ve just been told that a few extra people are turning up for tomorrow’s feast. And one of them happens to be vegan, another is gluten-free and the other one’s just going to be very (very) hungry. Festive feasting is all about fending off last-minute curveballs such as this, so here are three dishes to help keep you covered.

This is a fridge raid of all the root vegetables you have to hand. Don’t skimp on the potatoes, though: they’re what make it super-comforting. Use whatever sweet spice mix you have in the house and substitute another hard cheese for the parmesan, if you prefer.

In a small bowl, mix the chilli, vinegar, sugar and a teaspoon of salt and set aside to pickle.

Put a shallow, round, 28cm casserole dish for which you have a lid on a medium-high heat, add the butter and, once it has melted, add the rosemary, onion, baharat and two teaspoons of salt, and cook for five minutes, until the onions are pale and translucent. Add all the root veg, cook, stirring occasionally, for two minutes, then pour in 150ml water, cover and cook for another 15 minutes, stirring once halfway through, until the vegetables are cooked.

Turn on the grill to its highest temperature. Stir the double cream into the root vegetable pan, cook uncovered for five minutes, then take off the heat and stir in half the cheese. Sprinkle the remaining cheese on top, then grill for three minutes, until golden and bubbling.

Leave to rest and settle for 10 minutes, then scatter over the pickled chilli and a teaspoon of the pickling liquor. Serve hot with the parsley scattered on top.

This can be just about put together from a well-stocked pantry: those dried apricots and pecans are in there somewhere, trust me (and if they’re not, use figs and walnuts instead). Make it a day ahead, if you like, ready to reheat before serving and topping with the freshly made green sauce.

Heat the oven to 180C (160C fan)/350F/gas 4. Put the torn bread on a large roasting tray and bake for 15 minutes, turning a few times, until dry and crisp. (alternatively, leave the bread out overnight ahead of time and dry at room temperature, or use stale bread).

Meanwhile, put a large, shallow saute pan on a medium-high heat, then add three tablespoons of oil, the onion, celery, garlic, rosemary, apple, 100g of the mushrooms, a quarter-teaspoon of salt and a good grind of pepper, and cook, stirring frequently, for 15 minutes, until the onion is soft and translucent.

When its time is up, take the bread out of the oven and turn up the temperature to 210C (190C fan)/410F/gas 6½. Tip the bread into a large bowl, add the remaining mushrooms, oil, pecans, apricots, lemon zest, a quarter-teaspoon of salt and a good grind of black pepper, and mix to combine.

Pour the brandy into the onion pan, cook for 30 seconds, then stir in the miso and 250ml water and bring to a boil. Cook for another minute, then tip into the bowl. Using a spoon, mix quickly and vigorously to coat then tip the mix back into the pan. Spread it out evenly, with some of the mix poking out here and there, then bake for 25 minutes until nicely charred all over. Remove and leave to rest for at least 10 minutes.

While the stuffing is baking (or reheating), make the green sauce. Put the onion in a small bowl with the lemon juice and an eighth of a teaspoon of salt, toss and leave to sit for five to 10 minutes. Just before serving, stir in the remaining ingredients, season to taste and spoon over the baked stuffing.

These make a perfect quick dessert and are also quite versatile; granny smith apples will work instead of the pears, too. If you prefer, serve with vanilla ice-cream or whipped cream instead of creme fraiche.

Put the sugar, butter, thyme leaves, five-spice, ginger and an eighth of a teaspoon of salt in a 26cm, shallow cast-iron or oven-proof saute pan, mix well and set aside.

Peel the pears, keeping the stems attached, if possible, then cut them in half vertically. Using a small spoon or melon baller, remove and discard the seeds, then lay the pear halves cut side down in the pan. Scatter over the three thyme sprigs, star anise and lemon zest, and pour in the lemon juice and bourbon.

Meanwhile, make the vanilla creme fraiche. Mix the creme fraiche and vanilla bean paste in a small bowl, then spoon a tablespoon and a half of the mix over the pears. Scatter over a quarter-teaspoon of flaked salt and serve warm with the rest of the creme fraiche mix on the side.