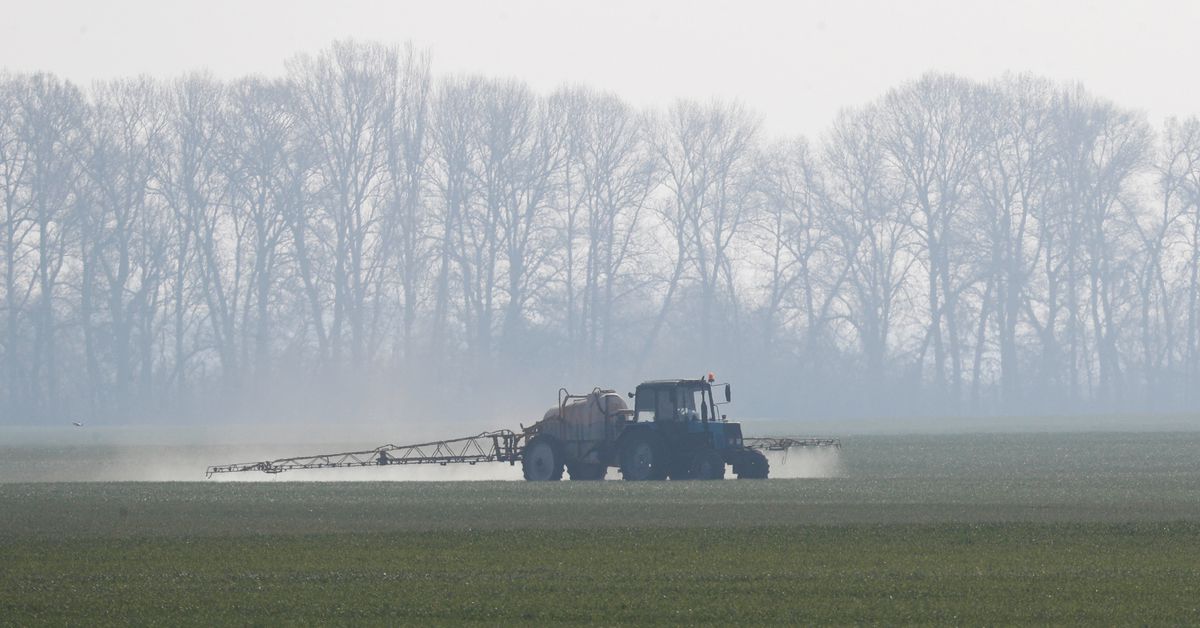 March 11 (Reuters) – The Russian invasion of Ukraine threatens millions of tiny spring-time sprouts that should emerge from stalks of dormant winter wheat in the coming weeks. If the farmers can’t feed those crops soon, far fewer of the so-called tillers will spout, jeopardizing a national wheat harvest on which millions in the developing world depend.

The wheat was planted last autumn, which, after a brief growing period, fell dormant for the winter. Before the grain returns to life, however, farmers typically spread fertilizer that encourages the tillers to grow off the main stalks. Each stalk can have three or four tillers, increasing the yield per wheat stalk exponentially.

But Ukrainian farmers – who produced a record grain crop last year – say they now are short of fertilizer, as well as pesticides and herbicides. And even if they had enough of those materials, they can’t get enough fuel to power their equipment, they add.

Some Ukrainian farmers told Reuters their wheat yields could be cut in half, and perhaps by more, which has implications far beyond Ukraine. Countries such as Lebanon, Egypt, Yemen and others have come to rely on Ukrainian wheat in recent years. The war has already caused wheat prices to skyrocket – rising by 50% in the last month.

The Ukrainian farming crisis comes as food prices around the world already have been spiking for months amid global supply chain problems attributed to the COVID-19 pandemic. World food prices hit a record high in February, and have risen over 24% in a year, the U.N. food agency said last week. Agriculture ministers from the world’s seven largest advanced economies were due Friday to discuss in a virtual meeting the impact of Russia’s invasion on global food security and how best to stabilize food markets.

International food and feed prices could rise by up to 20%as a result of the conflict in Ukraine, triggering a jump in global malnourishment, the United Nations food agency said on Friday. read more

Ukraine and Russia are major wheat exporters, together accounting for about a third of world exports- almost all of which passes through the Black Sea.

Svein Tore Holsether, president of Norway-based Yara International, the world’s largest maker of nitrogen-based fertilizers, said he is worried that tens of millions of people will suffer food shortages because of the farming crisis in Ukraine. “For me, it’s not whether we are moving into a global food crisis,” he said. “It’s how large the crisis will be.”

Ukrainian officials say they are still hopeful the country will have a relatively successful year. Much of that hope rests with farmers in the west of the country, which, so far, remains distant from the shooting.

But officials are taking measures to protect domestic supplies to ensure Ukraine’s population gets fed – posing another possible hit to export shipments. Agriculture Minister Roman Leshchenko said on Tuesday the country was banning the export of various staples, including wheat. Leshchenko has acknowledged the threat to Ukraine’s food supply and that the government was doing what it can to help farmers.

“We understand that food for the entire state depends on what will be in the fields,” he said in televised remarks Monday.

Moscow says it is conducting a special military operation in Ukraine to demilitarize and capture dangerous nationalists. It has denied deliberately targeting civilians and civil infrastructure, despite documented attacks on hospitals, apartment buildings and railroads.

Grain exports are a cornerstone of Ukraine’s economy.

In the coming weeks, farmers should also start planting other crops, such as corn and sunflowers, but they are struggling to get the seeds they need, said Dykun Andriy, chairman of the Ukrainian Agricultural Council, which represents about 1,000 farmers cultivating five million hectares.

Andriy warned that the fuel is the critical problem now. Unless farmers can get diesel to run their equipment, spring farmwork will be impossible and this year’s harvests doomed. “Farmers are desperate,” he said. “There is a big risk that we don’t have enough food to feed our people.”

Ukrainian farmer Oleksandr Chumak said little work is happening in his fields, some 200 km north of the Black Sea port of Odessa. He farms 3,000 hectares (about 7,500 acres) where he grows wheat, corn, sunflowers and rapeseed. Even if he had enough fuel to get his equipment into the fields, he said he had insufficient fertilizer for all of his crops and no herbicides.

“Usually we have maybe six to seven tons (of wheat) per hectare. This year, I think that if we get three tons per hectare, it will be very good,” Chumak said. He added he remains hopeful that Ukrainian farmers will find a way to grow enough food to feed their countrymen, but he does not expect much will be exported.

In northern Ukraine, he said friends of his have been reduced to skimming fuel from a ditch that was filled with diesel after a Russian attack on a train spilled fuel from several tankers. Other friends, in the occupied areas near Kherson, are scavenging diesel from ambushed and abandoned Russian tanker convoys, Chumak said.

Currently, he spends much of his time preparing for a Russian assault. “I live in Odessa. Every day I see rockets fly over my house.”

Val Sigaev, a grain broker at R.J. O’Brien in Kyiv, who evacuated last week, said it is unclear how much of the usual spring farming — planting and fertilizing — would be possible. High prices for natural gas – a major input for fertilizer – sent fertilizer prices up, so some farmers postponed purchases.

“Some people think we could plant as much as half of the crop,” Sigaev said. “Others say that only the West will see plantings and what is produced will be strictly for Ukrainian needs.”

The situation is especially dire in the southern port city of Kherson, the first Ukrainian city Russia captured after invading the country on Feb. 24. Spring-like weather adds to farmers’ urgency, if they don’t tend to their fields now this year’s harvest will be a bust.

Andrii Pastushenko is the general manager of a 1,500-hectare farm just west of the city, near the mouth of the Dnipro River. Last autumn, they sowed about 1,000 hectares of wheat, barley and rapeseed. His farm workers need to get into those fields now, but can’t, he says, and they’ve lost access to fuel. “We’re completely cut off from the civilized world and the rest of Ukraine.”

Additionally, many of Pastushenko’s 80 workers cannot come to work at the farm because they live a few miles to the north, across the front line. The manager’s problems are compounded because the region is drier than other agricultural areas of the country and his fields need to be irrigated. And that too requires fuel.

Unlike many, Pastushenko has a 50-metric ton nitrogen-based fertilizer stockpile. With the fighting all around him, however, he’s not sure that’s such a good thing: Fertilizer is highly explosive. “If something drops from a helicopter, it could blow the whole place,” he said.

He said he fears the harvest will be poor. Last year, his wheat and barley fields yielded about five metric tons per hectare. If he doesn’t spray insecticide – which he says he can’t get – and spread fertilizer, he doubts he’ll get a third of that amount.

“I’ve no idea whether we’ll be able to harvest something,” he said. “Something will come off the ground, but it won’t be enough to feed our cattle and pay our staff.”

About 150 km west of Pastushenko’s farm is the Black Sea port of Odessa, which remains under Ukrainian control. In peacetime, much of Ukrainian agricultural exports find their way onto ships at the port, Ukraine’s busiest. Today, no ships are leaving and the city is besieged by Russian forces.

Much of Ukraine’s harvest was due to be exported to North Africa, the Middle East, and the Levant. According to the United Nations’ World Food Program (WFP), Ukraine supplies Lebanon with more than half of its imported wheat, Tunisia imports 42 % and Yemen nearly a quarter. Ukraine has grown to become WFP’s largest supplier of food.

For some countries, rising prices could hammer governments as well as consumers because of state food subsidies.

Egypt, which has become increasingly dependent on Ukrainian and Russian wheat over the past decade, heavily subsidizes bread for its population. As the price of wheat rises, so will pressure on the government to raise bread prices, said Sikandra Kurdi, a Dubai-based research fellow at the International Food Policy Research Institute.

The country’s food subsidy program currently costs the government about $5.5 billion annually. Currently, nearly two-thirds of the population can buy five loaves of round bread daily for 50 cents a month.

Other developing countries with similar subsidies will also struggle with rising wheat prices. In 2019, protests over bread price increases in Sudan contributed to the overthrow of the head of state, Omar al-Bashir.

For countries that provide large subsidies, rising food prices will mean that either governments take on more debt or consumers will pay higher prices, Kurdi said.

Reporting by Maurice Tamman in New York, David Gauthier-Villars in Istanbul, Sarah McFarlane in Sydney, and Sarah El-Safty in Cairo; editing by Cassell Bryan-Low in London