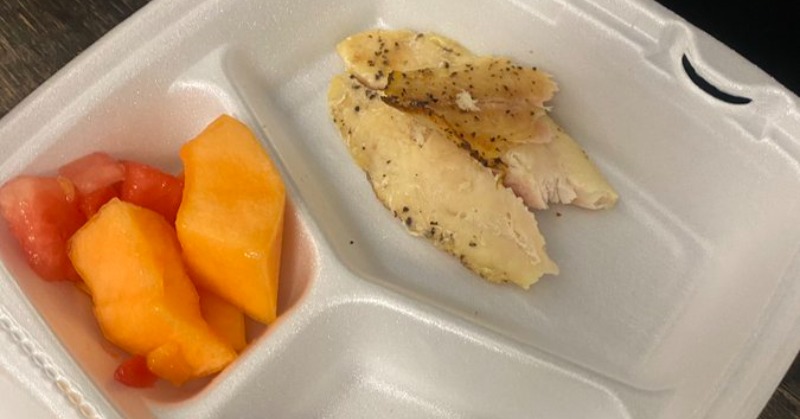 Thousands of people tried fleeing away from war-torn Afghanistan after the Taliban took control of the nation. While people tried to get away from their homeland as soon as possible, there were several saddening tales of families separating from each other.

However, many Afghans have taken refuge in different parts of the world and one of them shared a picture from the US.

A Twitter user and an Afghan refugee named Hamed Ahmadi shared a picture of the food he’s being served at the US camp of Fort bliss El Paso, Texas.

He wrote, “Not complaining but this is what I got last night for dinner and the next meal is 12 hours later. Refugee life might be safe but never easy & favourable. Fort Bliss El Paso Texas.”

The meal included some anaemic chicken slices and fruit.

Not complaining but this is what I got last night for dinner and the next meal is 12 hours later. Refugee life might be safe but never easy & favorable. Fort bliss El Paso Texas. #AfghanRefugees #afghanistan pic.twitter.com/2X7eP8Uwa0

The picture he shared received many different responses. While many trolled him for showing a picture like this, many defended him and criticised the amount of food he’s getting at the camp.

How about “thank you”? Be grateful. Have some humility and exhibit some dignity. No one owes you anything. I’m a refugee from Lebanon and I’m forever grateful.

This is complaining. People from many nations died trying to improve your country and then to get you out – where you have freedom to complain. Think of them & those grieving for them before tweeting these complaints.

For all of the people saying this person is ungrateful, seriously ask yourself if this amount of food would fill you up?? That’s the amount most of us eat as a snack in between meals. It’s not enough food for a meal, especially if that’s it for 12 hours.

i’m so sorry for the heartless people commenting. it shows how cruel they are when they pulling a “what about our troops” argument, as if it’s impossible to make sure both are looked after. it’s not one or the other.

The lack of compassion in the responses to you is frightening. You have had your life uprooted. No one chooses to start over with nothing unless desperate. America didn’t “rescue” you, it performed its hard minimum duty after bringing war to your country for 20 years. Take care.

The journalist and scholar, who spent the past five years in Kabul with his parents and siblings, did not want to flee Afghanistan – and certainly didn’t want to leave his family behind. According to another of his posts, he had to leave his mother behind in Afghanistan while his brother was killed in the war.