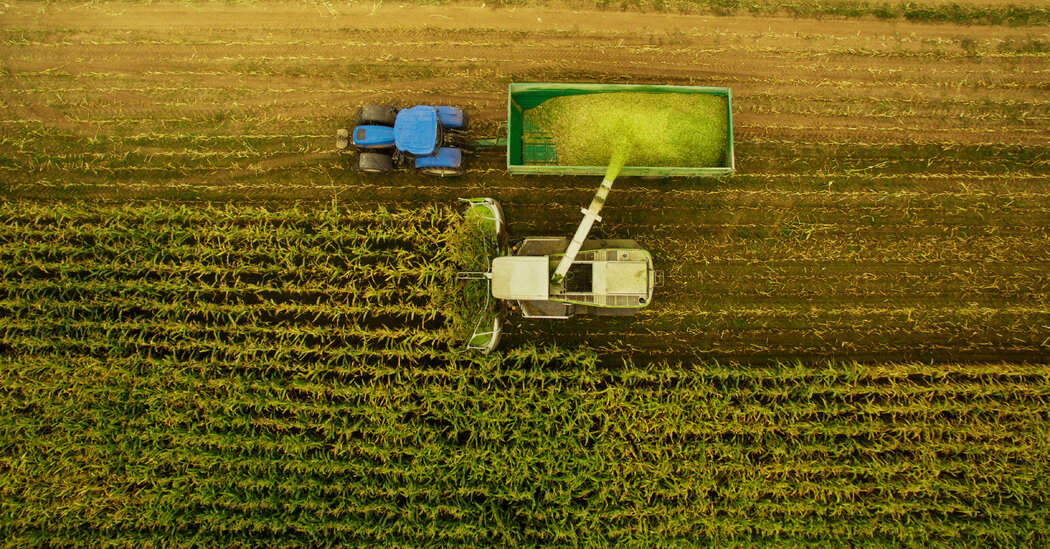 As anyone who drives is aware, gasoline prices are up a lot from their 2020 low. First, global economic recovery drove up oil demand, then Vladimir Putin’s invasion of Ukraine cut into Russian oil exports. But prices both at the pump and at the wellhead have stabilized, at least for now. By historical standards, real gas prices — prices relative to the overall cost of living — aren’t that high; in fact, they’re lower than they were from 2006 to 2014. And as of this morning, Texas crude oil was back below $100 a barrel.

Yet, while the energy crunch may be a bit less severe than some imagine, there’s a huge crisis in the global food supply. Indeed, over the past year the surge in wheat prices has been much bigger than the surge in oil prices:

This hurts here in America, but it hurts much more in poorer nations, where a much larger share of family spending goes to food. What’s behind the food crisis?

One piece of the story is obvious: Ukraine is normally a major agricultural exporter, but that’s hard to do when Russia is bombarding your railroads and blockading your ports. But there’s more to the story: Russia has halted much of its own grain exports, apparently in an attempt to hold down domestic prices. Kazakhstan, the region’s third-largest agricultural exporter, has followed suit.

Then there’s fertilizer. Modern fertilizer production is energy-intensive. Before the war, Russia was the world’s largest exporter, but Russia has now suspended those exports. Yet it isn’t just Russia. As a new analysis by Chad Bown and Yilin Wang of the Peterson Institute for International Economics points out, China — another major fertilizer producer — cut off much of its exports last year, again in an apparent attempt to keep domestic prices down. And as they point out, such export bans are, if anything, a bigger issue than the tit-for-tat tariff hikes of the U.S.-China trade war.

All of this is causing big problems for agriculture around the world, especially in emerging markets, like Brazil.

This is bad. It’s also an important lesson about the relationship between geopolitics and globalization.

Many people, I think, imagine that globalization is a fairly recent development. Economic historians know, however, that a surprisingly integrated world economy emerged between about 1870 and 1913, made possible by the advanced technology of the time: steamships, railroads and telegraphs. In the early 20th century, Britons were already dining on Canadian wheat, Argentine beef and New Zealand lamb.

Then, geopolitics — wars, the rise of totalitarianism and protectionism — killed off much of this first wave of globalization. Trade revived only with the postwar establishment of the Pax Americana, and it took around 40 years to restore world trade to 1913 levels:

What is true is that this first wave of globalization was relatively simple and largely an exchange of advanced-economy manufactured goods for primary products like, well, wheat. The complex value chains that characterize the modern world economy, in which, for example, cars made in wealthy nations include chips from Japan and wiring harnesses from Mexico and Ukraine, is indeed a largely post-1990 development, made possible to a large extent by containerization and modern information technology, and has pushed world trade to new heights.

But it turns out that both forms of globalization depend on a relatively stable geopolitical environment — which we seem to be losing. We’re not in “The Guns of August” territory, at least not yet, but there’s a definite whiff of 1914 in the air.

And one surprising aspect of recent economic problems, at least to me, is that they seem for now to be doing more damage to old-style globalization — should we call it globalization 1.0? — than to the complex economic relationships that developed after 1990. Despite the container shortage, the backups at the ports and all that, it’s still fairly easy to buy electronic gadgets that include components from a dozen countries. What’s really getting hit hard now is cruder stuff, like trade in wheat and fertilizer.

In any case, even before the invasion of Ukraine, there were growing reasons to wonder about the future of globalization. We’re often told that trade promotes peace, which may or may not be true. One thing that’s for sure, however, is that peace promotes trade. And as the world becomes a more dangerous place, things we take for granted, like large-scale trade in food, may be far more vulnerable than anyone realized.

A look at the lockdown nightmare in Shanghai.

… and what it’s doing to the global supply chain.