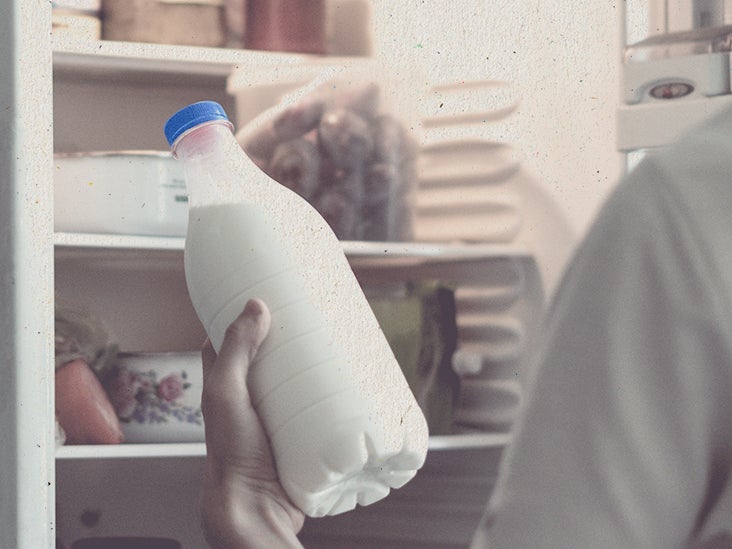 Milk can stay safe to consume for several days past the expiration date. Expiration dates on food and drink products relate to their quality rather than their safety. Drinking spoiled milk can make people unwell, but it is typically easy to tell when milk is bad.

There are many types of expiration dates on food and drink products, which can be confusing. Producers of milk typically pasteurize it to kill off bacteria before selling it. However, milk can still spoil and become unsafe for consumption.

In this article, we discuss how long milk can stay safe past the expiration date and explain what the different dates on food and drink labels mean.

There is no universal duration for how long milk is safe to consume after the expiration date. Different types of milk can remain fresh for varying lengths of time.

Most milk that people purchase in the United States has undergone , which involves heating the milk to kill harmful pathogens. Although this makes the milk safer to consume, it does not mean that it is safe to leave milk out of the refrigerator for an extended time, particularly after opening it. Some evidence suggests that pasteurized milk should remain fresh for 2–5 days after its sell-by date and 10–21 days in total.

There are different methods of pasteurization that can further extend the shelf life of milk. For example, ultra-pasteurized milk can last about 30–90 days. This longer shelf life is due to a higher heating temperature during the processing.

Manufacturers make aseptic, or ultra high temperature (UHT), milk by heating the milk with sterile equipment and filling it under aseptic conditions into specially designed containers that can extend the shelf life to more than 6 months. The product itself may also be shelf stable, meaning that it does not require refrigeration until a person opens it.

It is advisable to avoid drinking raw, or unpasteurized, milk as it may contain harmful pathogens that can pose serious health risks.

Food and drink packaging in the U.S. typically contains at least one date, which can have different meanings. These dates and their definitions can vary across labels and are not subject to uniform government regulations. According to the Food Safety and Inspection Service (FSIS), common dates on food and drinks labels include:

These labels do not relate to food or drink quality. With proper handling, all products should remain safe after any of these dates.

The FSIS does not require product dating, but voluntary use of dates must be truthful and follow the regulations, such as displaying both a day and month. Infant formula is one exception that the FSIS does regulate because it can be unsafe after the use-by date.

According to the , people in the United States waste about one-third of their food each year, which is worth $161 billion. An estimated 20% of that waste is due to confusion over the meaning of food and drink labels.

The FDA is now working with other federal agencies to standardize the use of “best if used by” to indicate the date of optimal quality — except in the case of infant formula. The aim is to reduce the number of people throwing away products past their expiration dates that are still safe to eat.

Milk naturally contains bacteria that can spoil and cause diseases, such as Escherichia coli and Salmonella. Milk spoilage is the result of an overgrowth of bacteria that compromises the texture, flavor, and overall quality of milk. Often, psychrotrophic bacteria, which can grow under cold conditions, are responsible for milk spoilage.

The production of milk involves several stages that aim to kill off these bacteria to extend the shelf life. Milk production follows guidelines from the United States Department of Agriculture. Manufacturers will rear and milk dairy cows before storing the milk at 40°F or under and transporting it for testing and processing. The processing of milk involves:

Several other stages may also be necessary, including further filtration or ultra high temperature treatment.

Pasteurization kills off most but not all bacteria in milk, which can continue to grow after processing. After opening milk at home, new bacteria can enter it and grow, eventually causing the milk to spoil.

Expiration dates are poor indicators of whether milk is safe to consume. The smell and appearance of the milk are clearer signs of how safe the milk is for consumption.

Spoiled milk will produce a sour smell as the bacteria produce lactic acid. The smell will intensify after the milk becomes unsafe for consumption. A yellowy color, crusts around the edges, and lumps in the milk also indicate that it is off.

The processing of milk has a significant effect on how long it stays fresh and safe to consume. However, people can take steps at home to extend this duration. These include:

Drinking small quantities of spoiled milk can cause no symptoms or some minor symptoms, which will typically go away on their own. For example, it can cause stomach pain, nausea, diarrhea, or vomiting. Spoiled milk is unlikely to cause any long-term problems.

Expiration dates relate to milk quality, not safety. Milk is generally safe to consume after the expiration date for at least a couple of days. People will typically be able to tell when milk is bad, as the smell and appearance indicate any spoilage.

The type of processing that the milk undergoes can affect how long it will stay fresh. However, it is still advisable to store milk properly and safely, such as by keeping it in the refrigerator. Drinking spoiled milk can cause some mild symptoms, but it is not usually harmful in the long term.