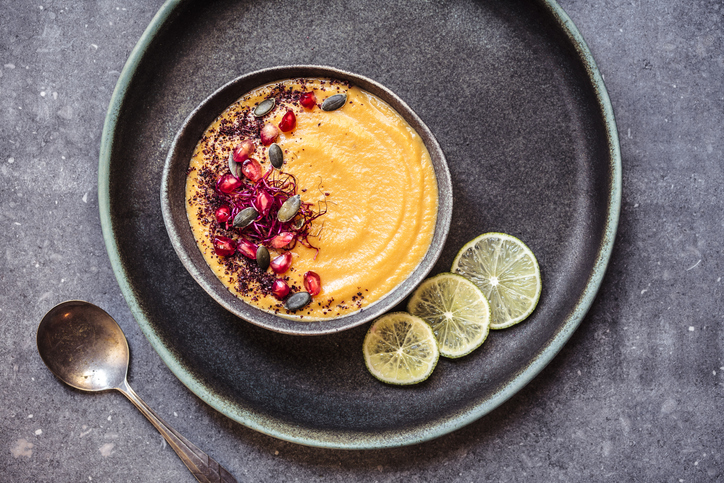 Comforting dishes are appreciated every fall and winter, but they’ve been a downright cornerstone of self-care during the pandemic. Comfort food is actually scientifically proven to be, well, comforting—and there has never been a greater collective need for it than during the past two years.

Not so coincidentally, the idea for America Test Kitchen‘s new cookbook, One-Hour Comfort ($25) was born in 2020. “We had a strong sense from our own personal experiences that people very much wanted comforting foods that nourished them both physically and emotionally, but they didn’t have a lot of extra time, energy, or mental focus to spend preparing them,” says Valerie Cimino, a senior editor at America’s Test Kitchen.

Of course “comfort food” doesn’t look (or taste) the same for everyone. To figure out exactly what counted as a comforting dish, Cimino says the team polled both America’s Test Kitchen staffers and subscribers, asking them what comfort food meant to them. “We found out that it means lots of different things to different people. It’s whatever makes them feel good—and that’s a personal thing,” she says. “One consistent theme was that it grew out of some food they loved when they were growing up; we got some specific answers there, like congee and Southern-style collard greens.” Cimino adds that another common theme was that comfort food was simply someone’s favorite food. “We got many answers that involved pasta and noodles, chicken, and cheese so naturally included plenty of recipes featuring those ingredients,” she says.

Once they had established what comfort food actually was came the really hard part: making sure all 170 recipes took less than one hour to make. “That ruled out a lot of choices, but we created as many workarounds as we could,” Cimino says. “For example, a number of people mentioned apple pie as a favorite comfort food. That’s really hard to do in an hour, but we were able to include a recipe for a skillet apple pie that uses a store-bought top crust draped over apples sauteed with maple syrup and apple cider. The actual baking time is only 15 minutes!”

The book is full of brilliant ideas like this and the vast majority of the recipes are nutrient-rich, too. Case in point are the three recipes excerpted below: sweet potato and peanut stew, green gumbo, and shawarma-style chicken and rice. They are especially high in protein and fiber, key to making any dish truly satiating. They’re also packed with delicious anti-inflammatory herbs and spices, like coriander, cilantro, cloves, and cumin.

As the America’s Test Kitchen surveys show, a major influence of comfort food comes down to what someone enjoyed as a kid. That means the recipes in the book span a wide range of deep cultural roots. The sweet potato and peanut stew is a traditional West African dish while the shawarma-style chicken and rice is a staple through the Mediterranean and Middle East. And the green gumbo? It comes from Louisiana. If you grew up eating these dishes, the recipes give you a roadmap for enjoying them without spending hours in the kitchen. And if you’ve never tried them, you just might discover a new favorite if you give them a try.

“Nowadays, the ever-growing range of ingredients available to the typical home cook makes it that much easier to craft recipes that honor and acknowledge [a dish’s] traditional origins while being upfront about the ways in which we have altered them, such as for speed or simplicity,” Cimino says. “For example, Middle Eastern chicken shawarma is usually long-marinated and slow-roasted on a vertical spit, which obviously you can’t replicate in an hour. So for the shawarma-style chicken and rice, we focused on the herbs and spices and the yogurt sauce to bring these flavors to the table. On the other hand, the green gumbo is just naturally quick and traditionally includes a changing variety of greens, depending on what’s available and what the cook prefers.”

Is your mouth watering yet? Scroll down for to see these healthy comfort food recipes, packed with fiber, protein, and a whole lot of deliciousness.

1. Toast peanuts in 10-inch skillet over medium heat, shaking pan occasionally, until golden and fragrant, three to five minutes. Transfer to a bowl and let cool, then chop nuts coarsely.

2. Melt butter in a Dutch oven over medium heat. Add onion, bell pepper, and salt and cook until softened, about five minutes. Stir in coriander, cayenne, and garlic and cook until fragrant, about 30 seconds.

3. Stir in broth, one cup chopped peanuts, and sweet potatoes and bring to boil. Reduce heat to low and simmer, partially covered, until sweet potatoes are tender, 15 to 20 minutes.

4 Measure out three cups solids and one cup liquid from soup and transfer to blender. Process until completely smooth, about 30 seconds. Return to pot with remaining soup and stir to combine, reheating briefly to warm through.

5. Stir in cilantro and season with salt and pepper to taste. Serve, sprinkling individual portions with remaining chopped peanuts.

3. Stir in water, scraping up any browned bits, and bring to boil over high heat. Stir in collard greens, one handful at a time; okra; and remaining 11/4 teaspoons salt. Cover, reduce heat to low, and simmer until greens are just tender, five to seven minutes. Stir in black-eyed peas; spinach, one handful at a time; and green beans and simmer until green beans and spinach are tender, about five minutes. Stir in vinegar and ­season with salt, pepper, and extra vinegar to taste. Sprinkle with ­scallions, if using. Serve.

1. For the sauce: Whisk all ingredients together in bowl. Season with salt and pepper to taste. Cover and refrigerate until serving.

2. For the chicken and rice: Bring four quarts of water to boil in a large pot. Add rice and 1 1/2 teaspoons salt and cook, stirring occasionally, until rice is tender but not soft, about 15 minutes. Drain rice, spread onto a rimmed baking sheet, and let cool completely, about 15 minutes.

3. Meanwhile, microwave oil, garlic, cumin, paprika, turmeric, and ­cinnamon in a medium bowl until simmering and fragrant, 30 to 60 seconds. Let cool slightly, then whisk in lemon juice and salt.

4. Combine rice, oil mixture, chicken, tomatoes, cucumbers, radishes, and parsley in a large bowl and toss gently to combine. Season with salt and pepper to taste. Serve with herb-yogurt sauce.

Our editors independently select these products. Making a purchase through our links may earn Well+Good a commission.