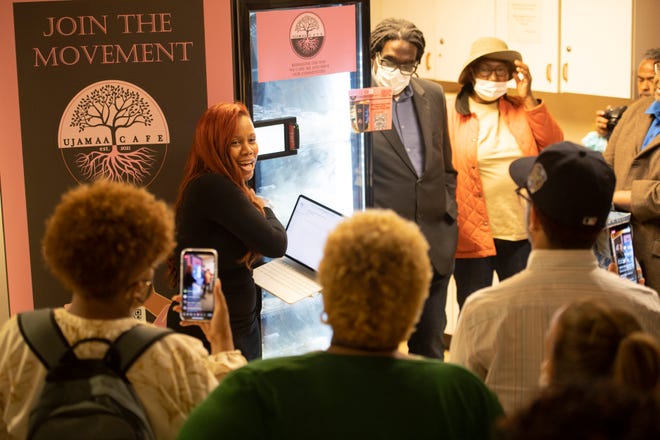 COVID-19 was a massive disrupter but for some like Leeja Carter, the pandemic proved serendipitous — in her case to help minority-owned restaurants, the poor, hungry and elderly.

Carter’s Coalition for Food and Health Equity, a black- and woman-led nonprofit that places hunger within the larger context of racial health equity and promote economic equity within historically marginalized communities, is rooted in 2020’s economic tempests.

“There was a local cafe I frequented in Jersey City,” the former Long Island University-Brooklyn professor of exercise psychology recalled. “The owner was afraid he would lose his investment where he put in his heart and soul.”

It sparked an idea that within 48 hours was rounding out to become the Hudson County Hunger Project. Carter called some of her students and mentees, created a GoFundMe. The money raised would pay restaurant owners to feed the hungry, homeless and seniors in areas underserved by food providers, aka food deserts.

In Carter’s case, the project fit solidly in her wheelhouse. Besides being a Fulbright scholar, prior to COVID she owned a company, which specialized in helping minority entrepreneurs get their businesses off the ground.

HCHP quickly grabbed the attention of Hudson County, which provided her a $600,000 grant.

Restauranteurs would be paid to create nutritious meals but there would be a caveat: “They had to be helping to invest in the social good,” Carter said.

Among the first of HCHP’s restaurants was Jersey City’s Freetown Road Project, a Caribbean restaurant, its owner/chef Claude Lewis, created after after winning on the Food Network show “Chopped” in 2019.

Freetown opened its doors in January of 2020 but hadn’t hit its stride when COVID shut everything down. HCHP was a lifesaver.

“We really needed the help,” Lewis said. “For pretty much two years, we depended on the money from the Hunger Project.”

“We are still just catching up on our bills, Lewis said, who added that he’s even delivered meals to shut ins and others.

“They called me speedy,” he said.

Chef Claude’s food is one of our clients’ all-time favorites, Carter added. His food is not just healthy but delicious.

In late 2020, New Jersey granted Carter $1.2 million to bring her program statewide. She renamed her organization, the Coalition for Food and Health Equity. Food, nutrition and health are interwoven.

By delivering the food to wherever it is needed, shut-in seniors, food pantries, even a park bench, if that is where a homeless person lives, it helps preserve their dignify. It works sometimes too well.

Carter recalled when a client called to ask if the meal delivered was mistake?

“They said ‘They have gotten salmon in my meal,'” Carter recalled. “I haven’t had salmon in a long time.”

It wasn’t a mistake. Too often those dependent of food pantries and soup kitchens don’t get nutrient-rich foods like salmon or avocado. It is not just moral boosting but health boosting, she said.

Besides the restaurants which provide meals, the Coalition has a new program, Ujamaa Cafe, where refrigerators at food pantries are stocked with ready to eat foods. The first two were placed last month, one of which was in Passaic, the other in Jersey City.

There’s no limit on food that can be taken from a food pantry.

They will monitor what is taken from fridge but only to judge what people like and how often it needs to be restocked.

Ultimately she’d like to see Ujamaa refrigerators across country especially in so called food deserts.

This month the Coalition will add two Bergen County restaurants to its eatery coterie, Bro-Ritos, a Hackensack eatery, and TJ’s Southern Gourmet of Englewood.

Bro-Ritos Chef Marcus Crawford said he heard of the Coalition program from the owner of Coffee and Cornbread in Montclair, which had been participating.

“It should help us through tough times,” Crawford said.

Sometime in the next month they will crank out up to 50 meals for the Coalition, consisting of rice, veggies, chicken, etc.

To get accepted in program requires businesses prove they are in for improving the social good and providing healthy food for the Coalition’s clients. The Coalition works with its affiliates to make sure individual clients dietary needs, such as food allergies, are followed.

“There’s no fried food,” Carter said adding that the benefit for working with food professionals is that they know how to make tasty but healthy food.

The Coalition plans to continue and expand its work, they already managed to provide more than 200,000 meals for 600 clients. They are looking at moving into both Philadelphia and New York.

They also looking for new sponsors to meet post-COVID challengers.

For instance, their drivers who pick up and deliver food twice a week, Mondays and Thursdays, are hard pressed by gasoline prices.

“Would I like someone to donate gas cards to us? Yes,” she said.

She envisions a nation where no one goes hungry, and everyone can access the food and wellness services they need.

​Matt Fagan is a local reporter for NorthJersey.com. For unlimited access to the most important news from your local community, please subscribe or activate your digital account today.