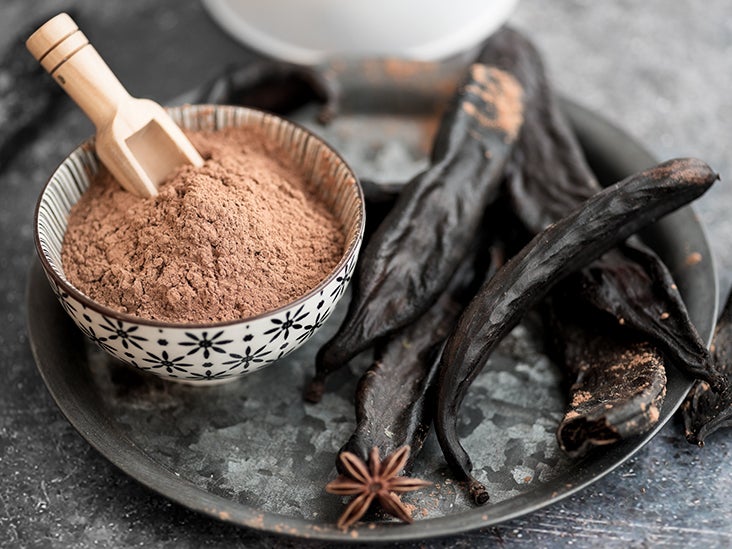 Carob powder is a common ingredient in desserts and baked goods and can act as a substitute for cocoa powder. High in fiber and low in fat, carob powder contains calcium and antioxidants.

The carob tree, native to the Mediterranean, is a flowering evergreen shrub. It produces carob pods, which contain both sweet pulp and inedible seeds.

People use the pulp to make carob powder, which has an earthy taste similar to chocolate.

Carob powder comes from the sweet, ripe pulp of carob pods. People dry, roast, and grind the pulp to produce a fine powder or flour.

It has a rich, nutty taste that is somewhat similar to caramel.

People often use it in place of cocoa powder or chocolate. Although it has a milder, slightly bitter flavor, it can act as a substitute in some cases.

Carob powder can be either raw or roasted. Lightly roasted is sweeter than dark-roasted powder, which has a more bitter, intense taste.

There are various ways to use carob powder, and it is particularly common in “healthier” recipes. These include recipes for baked goods, drinks, and no-bake treats.

Although carob peaked in popularity during the 1970s “health food” trend, it has come back into fashion in recent years.

Carob is sweeter and less bitter than cocoa, so people may need to use less sugar when using it as a substitute. This makes it a useful ingredient in foods such as pancakes, oatmeal, and milkshakes.

Additionally, people can use carob chips in place of chocolate chips.

Carob powder contains notable amounts of calcium, potassium, and fiber. These are all important nutrients, and people should aim to consume adequate amounts of each through food.

Additionally, carob powder is low in fat, so it is ideal for people who are trying to reduce their fat intake.

It is also caffeine- and gluten-free. This makes it a good choice for people who choose to avoid these ingredients and those who may be allergic or sensitive to them.

Although there are many health claims surrounding carob, the evidence to support them is limited.

Some people claim it aids weight loss. One small of young athletes notes a slight reduction in weight for those who consumed carob instead of the placebo. However, they did not have a notable decrease in fat or increase in muscle mass.

Other common claims state that carob’s antioxidant content can fight harmful cells, such as cancer.

A notes carob’s valuable qualities. While researchers may be able to use carob to make new medicines and treatments, this does not mean that eating carob powder will give the same results.

People who want to use carob powder in recipes should choose it for its taste, texture, and nutritional value.

Carob powder is safe for most people in small amounts. Although carob allergies are rare, they are possible.

People often use carob in place of cacao. While the two foods are similar, they also have several key differences.

Carob powder is slightly sweet and has a nutty, caramel-like flavor, whereas cacao has a bitter taste. It is virtually fat-free, which makes it a good option for people who want to consume less fat.

Cacao, the unprocessed form of cocoa, has a deeper, bitter taste. It contains caffeine and theobromine, an alkaloid that has effects similar to caffeine.

It also contains an amino acid called , which is linked to migraine headaches. Carob powder does not contain tyramine.

Carob powder is common in various desserts, baked goods, and beverages. It is naturally sweet with a nutty, earthy flavor.

People often use it as a substitute for cocoa powder. Carob does not contain gluten or caffeine, making it a suitable choice for people who are sensitive or allergic to these ingredients.

Carob powder is ideal for people who want to avoid the stimulating effects of cocoa or reduce the amount of sugar in certain recipes.

People who are sensitive to gluten can use carob powder in place of rye, wheat, or barley flour for bread and baked goods.

It is also a good replacement for hot caffeinated beverages, such as hot cocoa or coffee.