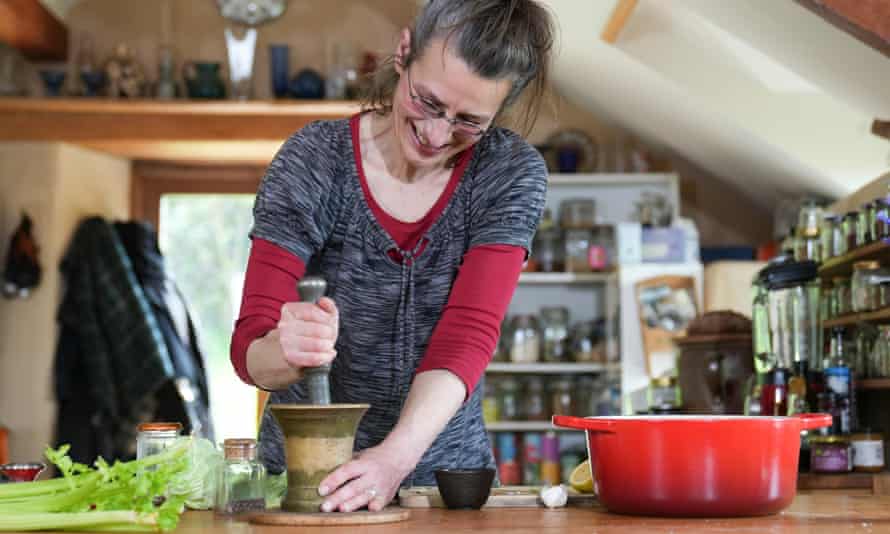 Whenever Katerina Pavlakis had friends over for dinner, it was not just the food that her guests would comment on. It was also the fact that she seemed so unflustered – “that I was cooking up all these things, and I wasn’t even stressed,” she says. Only then did Pavlakis realise that not everyone shared her experience in the kitchen – that, in fact, even people who enjoyed cooking and were good at it could find it a source of frustration.

That made Pavlakis curious: what made cooking so effortless for her, and so frustrating for others? After talking to friends and customers in the shop she runs with her husband in north Wales, she worked out where many were going wrong: they were trying – and struggling – to follow recipes. There, she could relate.

“I do love recipe books, and I have loads of them,” says Pavlakis. “But I cannot follow a recipe for the life of me.”

Pavlakis’ approach has always been to improvise: adding a pinch of this or a dash of that, sometimes only figuring out what meal she is making once it is already under way. But as random as it may seem, “there is a method”, she says.

In the online courses she runs as the Intuitive Cook, Pavlakis teaches people how to gain confidence and skills in the kitchen by throwing out rules, recipes and even ingredients lists.

It may seem counterintuitive, especially for beginners. But this more off-the-cuff approach to cooking has recently been gaining traction. The New York Times last year published a cookbook of “no-recipe recipes”, designed for those without the patience or inclination to follow detailed directions. The celebrity chef David Chang, founder of the Momofuku chain, espoused a similar philosophy in his book Cooking at Home, subtitled: “How I learned to stop worrying about recipes (and love my microwave)”.

To Pavlakis, it suggests fatigue with the overcomplication of cooking, and the pressure on everyone to produce restaurant-quality meals. Mainstream media portrays cooking as a “kind of aspirational hobby”, she says – leaving people feeling intimidated and overwhelmed by the number of sources on what and how to eat. Recipes that assume that everyone owns a mandoline slicer, or keeps preserved lemons in the fridge, can make people feel that they have failed before they have even got started.

More to the point, Pavlakis says, even following a recipe to perfection does not necessarily build confidence or skills. It is a little like the difference between following Google Maps’ directions, and actually knowing your way around. Taking an “intuitive” approach to cooking, informed by what you have to hand and what you like to eat, can help to minimise food waste and turn cooking into a lifelong habit – not a source of stress, or only for special occasions. And, Pavlakis adds, it is not as high-risk as you might think.

Here are few tips to get you started, from Pavlakis and other intuitive types.

Throw out the fear

People often cling to recipes out of fear of making something inedible, says Pavlakis – “you really have to try very hard”. She hears more complaints of meals being bland than ruined. The biggest challenge in learning to cook intuitively is getting over that insecurity, she says, “and daring to do what you want”. Try a small tweak in your next meal, then a bigger one. “Nine times out of 10,” she says, “it will probably turn out pretty good.”

Work with what you have …

Pavlakis suggests being led by the contents of your fridge, and reverse-engineering a meal from there. That way you won’t end up with half-used ingredients or odds and ends that will get thrown away. Thinking in terms of “flavour worlds” – herbs, spices and ingredients that we might consider “typically French”, say, or “typically Thai” – can steer you towards a particular dish or complementary pairing. Add oregano to tomatoes and you’re likely Italy-bound; turmeric or cumin might suggest an Indian curry. “It really does give you a completely different experience,” says Pavlakis. Even leftovers can often be repurposed into something entirely new.

Many recipes follow a similar process, Pavlakis says. “If you step back and start looking for the patterns, you can see which step fits where – then it becomes easier to change them, swap them or leave them out.”

She tends to follow a three-step method of base (onion, garlic, other “aromatic” vegetables and spices, cooked in some kind of fat), body (fresh produce and protein, often liquid) and top (herbs and flavourings). With tweaks to cooking time, temperature and amounts, this can lead to a hot pot or saute, stew or soup, sauce or stir-fry. Even a traybake combines the base and body step.

Likewise, in building flavour, you could think in terms of background, foreground and accents, with each layer complementing or contrasting the one before it. “If you’ve got those basic blocks, that’s when you can start playing,” Pavlakis says.

Many of us have become detached from our sensory experience of food. Pavlakis suggests a straightforward experiment: split a jar of passata or tin of tomatoes between ramekins, then add to each in turn a little salt, a lot of salt, olive oil, sugar, chilli flakes, balsamic vinegar, spices or herbs. (Keep one plain, as the “control”.) Mix, taste and assess your response – you may be surprised by the difference even small amounts make. “It’s so effective because we don’t usually pay that much attention,” says Pavlakis.

Chris Mandle, who writes the no-recipe Scraps newsletter on Substack, suggests swapping shallots for onions if that’s all you have, or green olives for black if you like one but not the other. “What’s the worst-case scenario? Chuck it in and try.”

Some swaps might not be neat – kale can be too thick and fibrous to stand in for spinach, for example – but there is often more room for flexibility than you might think, says Mandle. “If you don’t have dark chocolate for your chilli con carne, Worcestershire sauce will work, or cocoa powder, or even the last dreg of coffee from your mug.”

It might not taste exactly as the recipe developer intended – but that doesn’t mean bad. “Chances are, when you cook a recipe twice with the exact same ingredients, it’ll taste a bit different anyway,” says Mandle.

Baking is often spoken of as more technical than cooking, a science compared with an art. But even so, there is often room for adapting for taste.

“A creme fraiche lemon cake can very easily become a ricotta grapefruit cake, or a buckwheat maple syrup biscuit could be made wholemeal and honey,” says the pastry chef Nicola Lamb, author of the recipe development newsletter Kitchen Projects. Likewise, sugar can often be reduced (by up to 25%), and yoghurt or creme fraiche added without consequence – “as long as the cake mix still looks like cake mix”.

Much of baking is working with ratios, as with the Victoria sponge – “the classic non-recipe recipe,” says Lamb. “Equal parts everything – flour, butter, sugar, eggs – gives you a pretty perfect sponge, with a bit of technique.”

But, Lamb adds, precision is important: “I would never dream of baking without a scale.”

Work with the elements

Both Pavlakis and Mandle swear by Samin Nosrat’s book (and Netflix show) Salt, Fat, Acid, Heat. Mandle says it showed him how to work with those elements – “and not let them boss you around”.

For example, in need of salt, he used up half a tin of sardines by flaking them into a pasta sauce in place of anchovies. “It was so good! Once you know why you’re adding acid into a dish – like salad dressing, or a cabbage slaw – it’s much easier to swap out the champagne vinegar you don’t own for freshly juiced lemons instead.”

The addition of acid, sweetness or fat can also help with rebalancing a dish that seems in danger of going south.

If the taste of onion or garlic is too biting, maybe it needs to sweat further in the pan. Or if a stew or dal tastes flat, try bringing it into focus with chilli, salt or a squeeze of lemon or lime. Be intentional in tasting before and after, says Pavlakis. “If you can’t detect any difference, be bolder.”

If an addition does backfire, think of it as a chance to learn about your particular tastes – not those of a recipe developer, who is often required to play it safe.

Nosrat says “cooking is all about using your senses” – especially common sense. “If you feel that some combination of ingredients would be disgusting, then it probably is,” says Pavlakis. “Your intuition is telling you something there – the same way as when you leaf through a cookbook, one recipe catches your attention, while five others don’t.”

Be curious about what sounds delicious to you, and how you might repurpose those elements – then try it out. You can only hone your intuition through trial and error, says Pavlakis – not by reading about cooking, or watching other people. But the benefits may be felt beyond the kitchen. “There’s a lot of talk about getting out of your comfort zone, trying something new, learning to take risks – this is an extremely safe way to practise that as a life skill.”