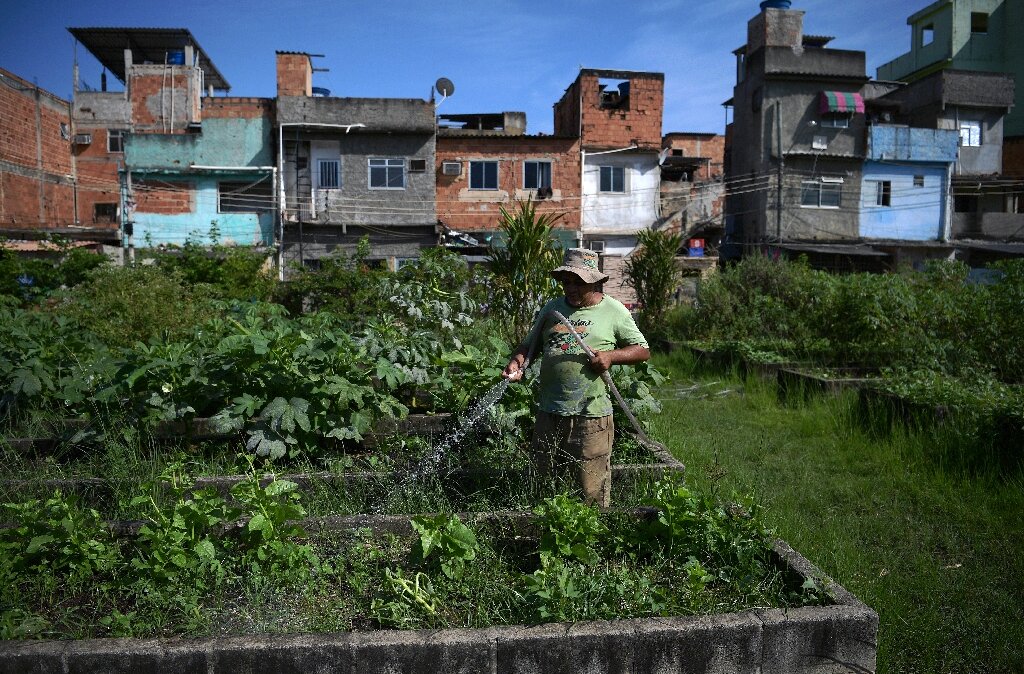 Gun-toting youths watch over a street in a Rio de Janeiro slum hit hard by drug trafficking, but walk a bit further and this rough area also boasts the largest urban vegetable garden in Latin America.

This success story is unfolding in a favela called Manguinhos in the north of Rio, and thrives as the rest of the country frets over rampant inflation and worries over Russian fertilizer, a major concern for Brazil’s powerful agriculture sector.

The first seed was planted in late 2013 on a parcel of land known then as “crackolandia” because it was home to so many drug addicts.

And little by little it has established itself and come to be respected in a neighborhood where drug traffickers are in charge.

These days the garden feeds some 800 families a month with produce that is pesticide free and affordable, two features that do not always go hand in hand.

“Why do poor people have to be doomed to eating poisoned food? My goal is to stop organic food from just being for the elite,” Julio Cesar Barros, one of the managers of the garden, told AFP, alluding to high priced fruit and vegetables sold in wealthy neighborhoods like Copacabana and Ipanema.

The Manguinhos garden is one of 56 in Rio that Barros launched with city authorities in 2006. And it has been praised by an international agreement called the Milan Urban Food Policy Pact as one of the best such systems in the world.

This particular garden is the size of four football fields and every month it produces 2.5 tons of yuca, carrots, onions, cabbage and other vegetables.

Half is sold to families for an average of two reales (40 US cents) per kilo and the rest is donated to orphanages and shelters.

A way out of drugs and crime

Wearing a cap to ward off the hot sun, Dione Enedina Da Silva, 73, crouches down and rips up weeds growing among the rows of vegetable plants.

“The garden changed everything for me: the way I lived, the way I ate,” this woman with 10 grandchildren and many great grandchildren said. “Before I barely had money to buy carrots and onions.”

Da Silva is one of 25 employees of the garden, who are paid with revenue from sales. She used to work cleaning hospitals, but other workers at the garden were involved in drugs and crime in the slum and had a grim future, said Barros.

That is the case of a 40 year old employee who prefers not to give his name or details of his past.

“Working here is therapy. I come every day, rain or shine. I am not leaving,” he said.

He is now proud of what he does and says his work means his 11 year old daughter eats good, healthy food.

“Food education here is awful,” said Barros. Indeed, the rate of obesity among people over age 20 rose from 12.2 percent to 26.8 percent from 2002 to 2019, according to government statistics.

“What happens if a child arrives home with a vegetable they planted at school? Education changes and the child begins to influence the parents to eat better,” said Barros, whose projects also features gardens at schools.

“Eating healthy is important but food is not always affordable,” said Alesandra Almeira, 39, a slum resident who shops at the Manguinhos garden every week.

Barros said the quality of the produce from these gardens is drawing the attention of health-oriented restaurants in Rio, who have started buying at community projects.

“I have a problem: is the food no longer going to be for those who need it and go back to the rich? We have to figure out a way to resolve this.”

In the meantime, Barros’s project is going full steam ahead.

The Rio city government has announced plans to expand a garden in the Parque de Madureira area of the city to make it almost four times the size of Manguinhos. Officials said that would make it the world’s largest urban garden.

This document is subject to copyright. Apart from any fair dealing for the purpose of private study or research, no
part may be reproduced without the written permission. The content is provided for information purposes only.