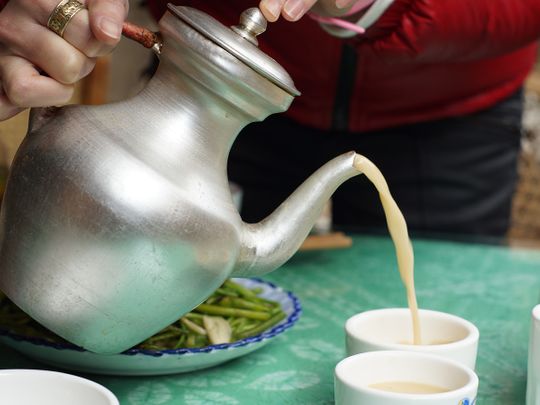 Maybe keeping calm and carrying on isn’t how the internet has reacted to this viral trend. We are talking about the Indian street food vendor grabbing attention for making butter chai. In the video posted by @eatthisagra, the vendor is seen boiling milk, adding tea leaves, a few spices and then adding a block of butter into the brew. Once the butter has completely melted, he pours the steaming concoction into an earthen pot or kulhad and serves it.

While the video might have gone viral, there is a 600-year-old history behind it, and it is the national drink of Tibet. Brewed with tales of the country’s past, butter chai or po cha as it is known isn’t as easy to make, as it seems.

It is a complex process, has a high nutritional value and is salty. Yes, you heard that right – it is not sweet, and it most definitely isn’t your average cuppa. Our curiosity led us to discover its uniqueness, and here’s what we know so far….

Gulf News Food caught up with 39-year-old Tenzin Chokay, a Tibetan expatriate in Dubai, who runs a marketing firm. Having never visited her hometown, it is the comforting memory of growing up with po cha, which helps her imagine what the mountainous region must be like. “My parents moved to India in 1959, as kids. They were both 10 years old at the time, so naturally, all that they learnt about Tibet was its food. We use a lot of butter in our cuisine, so the tea is no exception here.”

Dubai-based 44-year-old Tibetan expatriate Tashi Dhondup’s memory of butter chai – or ‘salt tea’ as he calls it – reminds him of days he spent with his cousins drinking the beverage. “I grew up in Uttara Kannada, district in Karnataka, India, but I had cousins in Tibet – and they would come and meet me with boxes of tea to make salt tea at home. It reminds me of the tales we heard as children of how Tibet used to get its tea from China in the early days – and these would reach after two to three months, all fermented with a unique taste. We then put these leaves in butter, milk, and salt and sipped it until the vessel was empty … it needs to grow on you completely before you can like it.”

As Dhondup said, Tibetan po cha is more of an acquired taste, primarily because of its unique salty flavour. Traditionally made with yak’s butter, water, salt and pu-erh tea leaves, Tibetans consume a minimum of 60 cups every day to stay warm during brutally cold winters.

“I had a friend who came from Nepal with two to three bags of pu-erh tea. So now it’s all in little tea bags – you don’t get the leaves separately as often,” said Dhondup.

Susmita Das Gupta, an expert tea artist based in India

We also caught up with Susmita Das Gupta, an expert tea artist based in India. “A traditional drink in Tibet, po cha, became popular after a Chinese princess married a Tibetan king in the seventh century. She brought tea as a gift, but Tibetans only added butter much later. Tibet, being at a high altitude, was known for its presence of yaks at the time, and Tibetans only drank yak milk, made butter with yak milk, and so on. Therefore, they stopped using milk for the tea and started using butter because it provided a thicker and creamier brew. However, more recently, several Tibetans opt for cow’s butter rather than yak’s butter because it is inexpensive,” explained Gupta.

How is the butter chai made?

“Po cha is made in a churn called cha dong. Drinking the tea right out of this churn has a different taste altogether – your tea is creamier, has thicker foam and provides the ultimate comfort,” said Chokay.

The cha dong is a sizeable wooden churn that holds the yak butter, tea, water and salt, which is then shaken until it reaches a thick, stew-like consistency. It is then poured in teapots or jars and served in cups. Porcelain cups are often used, and if your family is from a higher standard of living, copper, bronze, or silverware are used.

Speaking of comfort, as we said, butter tea is best consumed during the winter. The warmth comes from the tea leaves and yak’s milk. “Traditionally, po cha is made with pu-erh tea leaves, which are fermented, compressed and made into blocks. Po cha isn’t just popular in Tibet, but can also be found in Ladakh, and other cold places… now in Delhi too. However, in Ladakh, what they do is make a chewy product out of yak’s milk and keep it in their mouth to stay warm. Similarly, the butter is also a by-product added to tea to stay warm.”

A tradition that is fading over time

While Chokay remembers her country’s tradition through the butter yak tea, she said it is fading. “Today, most people make the tea using an electric blender or food processor, and sometimes it tastes a little runny rather than creamy. So many people think it is a trend, but it is a part of our history, our culture. I do make it at home, but it never comes up to how Tibetans would make a traditional po cha.”

However, Dhondup differs, for him the tradition is preserved through the trend. “For me, I like that it’s become a trend because it gives everyone a glimpse of home [Tibet]. But, as I said, it needs to grow on you before you can appreciate it,” he concluded.

Share your food stories and recipes with us on [email protected]