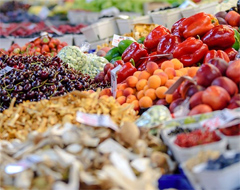 Ottawa–Half of the global population will depend on foreign countries for their food supply by 2050 and international markets must function better to keep them from going hungry, says Claire Citeau, Executive Director of the Canadian Agri-Food Trade Alliance (CAFTA).

Currently international markets for food often function poorly because of trade-distorting subsidies and various forms of government protection, she told the Commons agriculture committee. Food export restrictions can be highly damaging and may destabilize markets and ultimately lead to higher prices.

“The fragility of the trading system harms Canada’s ability to be the breadbasket to the world that we aspire to be.”

To grow its food exports, Canada needs to keep diversifying its foreign agrifood markets, she said. “We must ensure that we do not slide backward and retreat by allowing barriers in the name of food security.”

Canada also needs to avoid export restrictions and prohibitions on agrifood trade because there are already restrictions on food, feed and fertilizer imports in 52 countries around the globe.

Canada should support international action on a recent OECD report on agriculture policy that said in most cases, existing domestic support in agrifood distorts trade without providing effective solutions to food security and sustainability, Citeau said.

The report also suggested that public spending be shifted toward investments in food and agriculture innovation and improving food supply chain infrastructure and resilience.

Long overdue is reinstatement on the appellate body of the World Trade Organization, which can settle trade disputes among counties. “This is the core of the function of the WTO, and it holds the key to stability, security and predictability to conduct global trade.

“Access to food should know no boundaries. Agricultural trade can feed people, the planet and the economy, but it can only happen through global co-operation and better predictability and security in the multilateral trading system, she said.

CAFTA’s member “look to the government to continue to open doors and champion regulations that will allow the industry to remain competitive globally, as well as work to limit the use of regulatory approaches that restrict trade and enact barriers. We need to be essentially quicker to the market with products and policy solutions.”

Canada has an immense opportunity to seize to help the world and strengthen this country’s place in the world and competitiveness as an agrifood exporter.

“International trade is essential for food security and nutrition. It provides livelihoods to millions and plays an important role in the sustainability of the food system. It is crucial that the trade policy environment is transparent, predictable and science- and rules-based,” she said.

“Policy-makers should refrain from using export restrictions and instead reorient support policies toward investments in productivity, sustainability and resilience.

“To ensure that Canadian agrifood can continue to play an important role in global food security, exporters must have competitive access to markets guided by the principles of free and rules-based trade. International trade serves as the backbone of Canada’s food sector and the global food syste