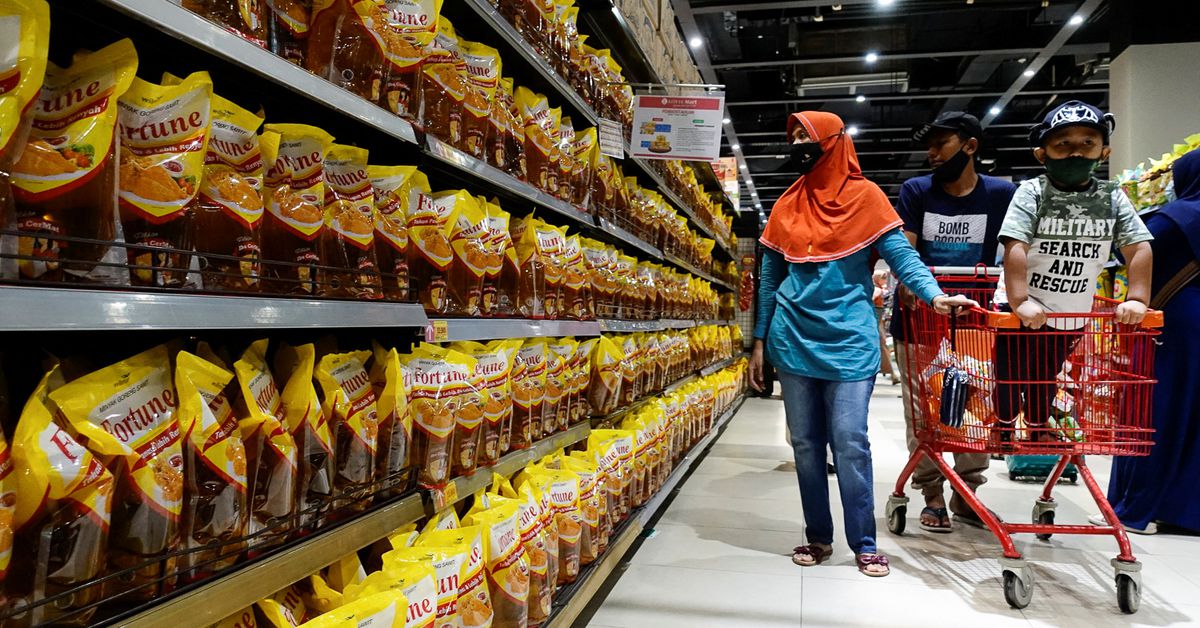 The halting of shipments of the cooking oil and its raw material, widely used in products ranging from cakes to cosmetics, could raise costs for packaged food producers globally and force governments to choose between using vegetable oils in food or for biofuel. Indonesia counts for more than half of global palm oil supply.

“I will monitor and evaluate the implementation of this policy so availability of cooking oil in the domestic market becomes abundant and affordable,” he said.

“This move is rather unfortunate and totally unexpected,” he said.

Alternative vegetable oil prices spiked in response to the measure which will take effect on April 28. Soybean oil, the second most used vegetable oil, rose 4.5% to a record high of 83.21 cents per pound on the Chicago Board of Trade . read more

Global prices of crude palm oil, which Indonesia uses for cooking oil, have surged to historic highs this year amid rising demand and weak output from top producers Indonesia and Malaysia, plus a move by Indonesia to restrict palm oil exports in January that was lifted in March.

Other countries have experimented with crop protectionism to try to keep domestic prices down. Argentina, the world’s top exporter of processed soy, briefly halted new overseas sales of soy oil and meal in mid-March before hiking the export tax rate on those products to 33% from 31%.

The U.S. Department of Agriculture urged international cooperation during the war in Ukraine, rather than export bans.

Global edible oil markets have been roiled this year by Russia’s invasion of Ukraine, a move Russia calls a “special operation” to demilitarise its neighbour, which cut off shipments of sunflower oil from the region.

The Black Sea accounts for 76% of world sunoil exports and commercial shipping from the region has been severely affected since Russian forces entered Ukraine in February. read more

Large supplies of alternatives including soy and rapeseed oil are not readily available either, after droughts hurt the most recent crops in Argentina, Brazil and Canada.

New facilities for processing soy and canola oil are expected to open in the United States and Canada respectively in coming years, as demand for plant-based biofuels grows, but ramping up production in the near term will be difficult.

Industry group the Clean Fuels Alliance America said the move could hurt biofuel producers, even though U.S. biodiesel and renewable diesel producers don’t use palm oil, as supplies of all oils are tight.

“Sky would be the limit for edible oil prices now. Buyers were banking on palm oil after sunoil supplies fell because of the Ukraine war,” a Mumbai-based dealer at a global trading firm said.

“Now they (buyers) don’t have any option as soyoil supplies are also limited.”

Malaysian producers say the world’s No. 2 palm oil exporter, which is facing a production shortfall due to a pandemic-induced labour shortage, is unlikely to be able to plug the gap.

Indonesia has since 2018 stopped the issuance of new permits for palm oil plantations, often blamed for deforestation and destroying habitats of endangered animals such as orangutans.

Palm oil industry association GAPKI said it would adhere to the policy but had reservations.

“If this policy has any negative impact on the sustainability of the palm oil sector, we would ask the government to re-evaluate the policy,” it said in a statement.

In Indonesia, the retail price of cooking oil averages 26,436 rupiah ($1.84) per litre, up more than 40% so far this year. In some provinces across the country, the prices have nearly doubled in the past month alone, according to a price monitoring page.

Demonstrations by students have taken place in several cities across Indonesia in recent days over high cooking oil prices.

Indonesia’s government has set a cap of 14,000 rupiah per litre for bulk cooking oil, but Trade Ministry data showed that it was sold at more than 18,000 rupiah this month.