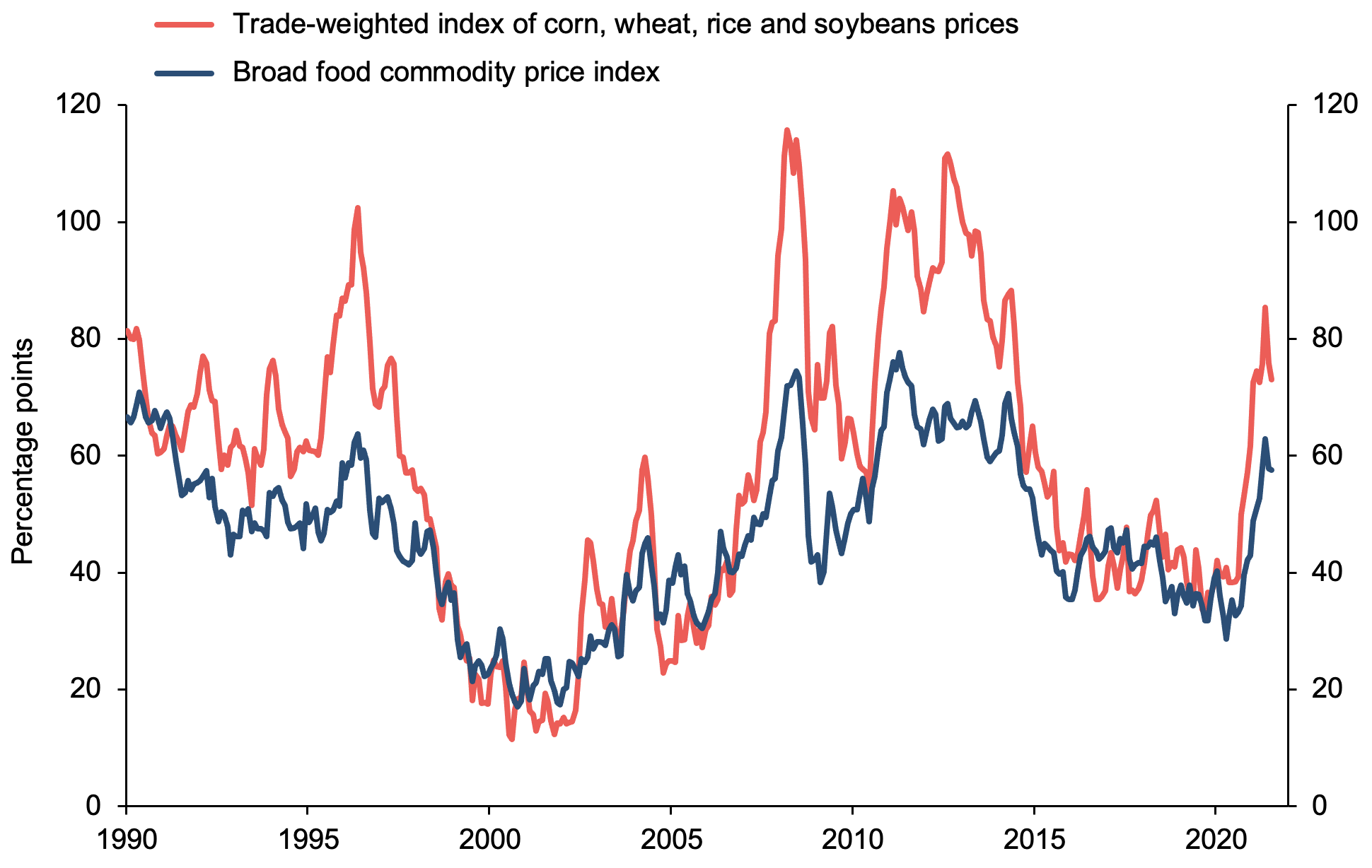 The Intergovernmental Panel on Climate Change (IPCC) projects a significant rise in the frequency, duration, and intensity of extreme weather events such as droughts, heatwaves and heavy rainfall (IPCC 2021). The direct local economic repercussions of such events are considered to be greater in low-income countries because these countries typically already have hotter climates, which implies that ecosystems are closer to their biophysical limits, and have less access to technology that can mitigate the consequences of extreme weather. Moreover, most low-income countries have very high shares of agriculture in economic activity, which is the most vulnerable sector to weather shocks (Nordhaus 2006, Dell et al. 2012, Noy 2012, Tol 2015, Cruz and Rossi-Hansberg 2021). Since poor countries have to bear the bulk of the climate change burden, it is often argued that this acts as a disincentive for rich economies to mitigate their greenhouse gas emissions (Althor et al. 2016).

However, the rise in the frequency and intensity of severe weather events around the globe, as well as crop diseases and pests due to climate change, could also have an impact on the economic performance of countries that are not directly exposed to the extreme events through global agricultural production shortfalls and surges in food commodity prices. Specifically, since global production of the most important crops is concentrated in a small number of major producing regions that are vulnerable to extreme weather conditions, the IPCC projects greater risks of global food system disruptions and agricultural production shortfalls that trigger substantial rises in global food prices (IPCC 2019). Such food commodity market disruptions at the global level are not science fiction; extreme droughts in several major producing regions at the same time were, for example, the primary reason for the rise in the prices of the key staple food items in the second half of 2010 and summer of 2012 by 40% and 20%, respectively, which can be observed in Figure 1 (Barriopedro et al. 2011, De Winne and Peersman 2016). Studies conclude that an event that would have been called a 1-in-100 years extreme adverse global food production shock over the period 1951–2010 may become as frequent as 1-in-30 years before the middle of the century (Bailey et al. 2015).

Note: All prices are in US dollar and measured as 100 times the natural log of the index, deflated by US CPI. The broad food commodity price index is a trade-weighted average of benchmark prices for cereals, meat, seafood, vegetable oils, sugar, fruit, vegetables and dairy products. Data from the IMF.

In De Winne and Peersman (2021a), we examine the impact of disruptions in global food commodity markets on the economic activity of 75 advanced and developing countries. For each country, we have estimated the effects of changes in global food commodity prices that were caused by harvest disruptions and by weather shocks that occurred in other regions of the world. The harvest disruptions are unanticipated shocks to the aggregate harvest volumes of the four most important staple food commodities: corn, wheat, rice, and soybeans. The weather shocks are deviations of agricultural-weighted global weather conditions (i.e. a quadratic in average temperature as well as total precipitation weighted by grid-level agricultural output and crop calendars) from their historical averages and long-term trend. For each country, we only look at shocks that occurred in other regions of the world to measure the macroeconomic effects via global food commodity markets rather than direct effects of extreme weather on local economic activity.

Figure 2 shows the average responses of economic activity in all 75 countries to a 10% increase in global food commodity prices caused by both types of shocks. The dynamic effects turn out to be very similar for both sources of food price shifts; that is, real GDP reaches a maximum decline of 0.53% after six quarters. This impact is considerable since extreme weather has triggered several price shifts of more than 10% and up to 30% in the past. The results also suggest that the strong rise of global food commodity prices in recent periods (see Figure 1) could impede the post-covid recovery. 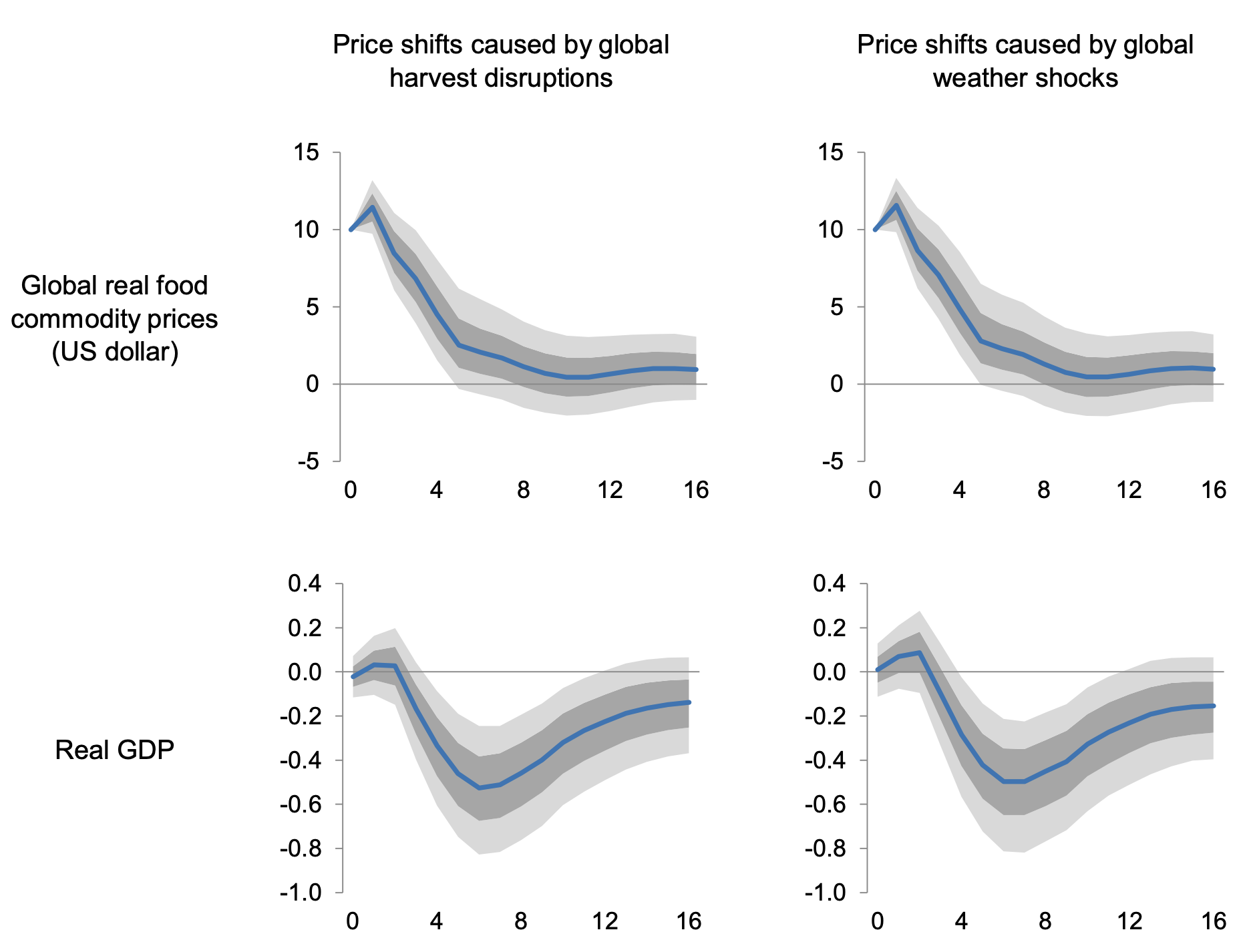 Note: the price shift is at period 0, while all other determinants are kept constant. Horizon of the responses (x-axis) is quarterly. 68 and 95% confidence intervals. The first column isolates, for each country, price changes that are caused by unfavorable harvest disruptions in other regions of the world, and the second column price changes caused by weather shocks in other regions of the world. Results are based on 75 advanced and developing countries, covering the period 1970Q1-2016Q4. Source: De Winne and Peersman (2021a).

We further find that several indicators of (expected) global economic activity decline as a consequence of the food commodity market disruptions, whereas consumer prices increase significantly. In related research, De Winne and Peersman (2016) and Peersman (forthcoming) show for the US and euro area, respectively, that food commodity price surges have an impact on food retail prices through the food production chain, but also trigger indirect inflationary effects via rising wages and exchange rate shifts. In addition, households do not only reduce food consumption – that is, there is even a much greater decline of durable consumption and investment. The latter is partly the consequence of the monetary policy response to stabilise the inflationary consequences. Overall, the macroeconomic effects turn out to be a multiple of the maximum impact implied by the share of food commodities in the consumer price index and household consumption.

Differences between rich and poor countries

Figure 3 reveals that high- and middle-income countries are much more affected by global food commodity price shifts that are caused by harvest and/or weather shocks elsewhere. Real GDP in these two groups of countries declines by 0.52% and 0.91%, respectively, whereas the peak decline in low-income countries is only 0.19% and statistically insignificant.

The stronger effects in advanced economies are surprising, since the share of food (commodities) in household expenditures is much lower than in low-income countries. Moreover, since high-income countries typically have more effective government institutions, it is less likely that food price increases trigger conflicts that are detrimental for economic activity, such as food riots (De Winne and Peersman 2021b). Finally, advanced countries have better developed financial markets to absorb income shocks.

It turns, however, out that these favourable characteristics are offset by a number of less advantageous features. First, we find that the macroeconomic repercussions are weaker in countries that are net exporters of agricultural products, which can be explained by a favourable terms of trade effect. In addition, we document a more subdued decline of real GDP in countries that have higher shares of agriculture in economic activity, which is likely the consequence of the fact that these countries are more isolated from changes in global prices because more households are self-sufficiency farmers and a lot of agricultural products are traded on local markets only due to higher transportation costs in rural areas. Finally, we find weaker effects in countries that have lower shares of non-agricultural trade in GDP; that is, countries that are less integrated with the rest of the world via trade are also less sensitive to the global economic downturn caused by the rise in food commodity prices.

There will be more frequent and greater downturns in economic activity compared to a ‘no climate change’ scenario through increases in global food commodity prices that are the consequence of extreme weather events in major agricultural production regions, such as droughts and heatwaves. In contrast to common perception (e.g. Financial Times 2021, Espitia et al. 2020), the macroeconomic repercussions of increases in global food prices are greater in advanced economies than in low-income countries. This suggests that the consequences of climate change on advanced countries may be greater than previously thought. This also implies that we need a more nuanced debate on the welfare effects of higher food prices, as earlier argued by Headey (2011) and Hertel and Rosch (2011).

Finally, swings in global food prices appear to be important for economic activity in many countries. The strong rise of global food commodity prices since the outbreak of COVID-19 could thus seriously impede the recovery.

Dell, M, B Jones and B Olken (2012) “Temperature Shocks and Economic Growth: Evidence from the Last Half Century,” American Economic Journal: Macroeconomics 4: 66–95.

IPCC (2021), Climate Change 2021: The Physical Science Basis. Contribution of Working Group I to the Sixth Assessment Report of the Intergovernmental Panel on Climate Change, Cambridge University Press (in press).

Nordhaus, W (2006), “Geography and macroeconomics: new data and new findings”, Proceedings of the National Academy of Sciences of the United States of America 103: 3510–3517.