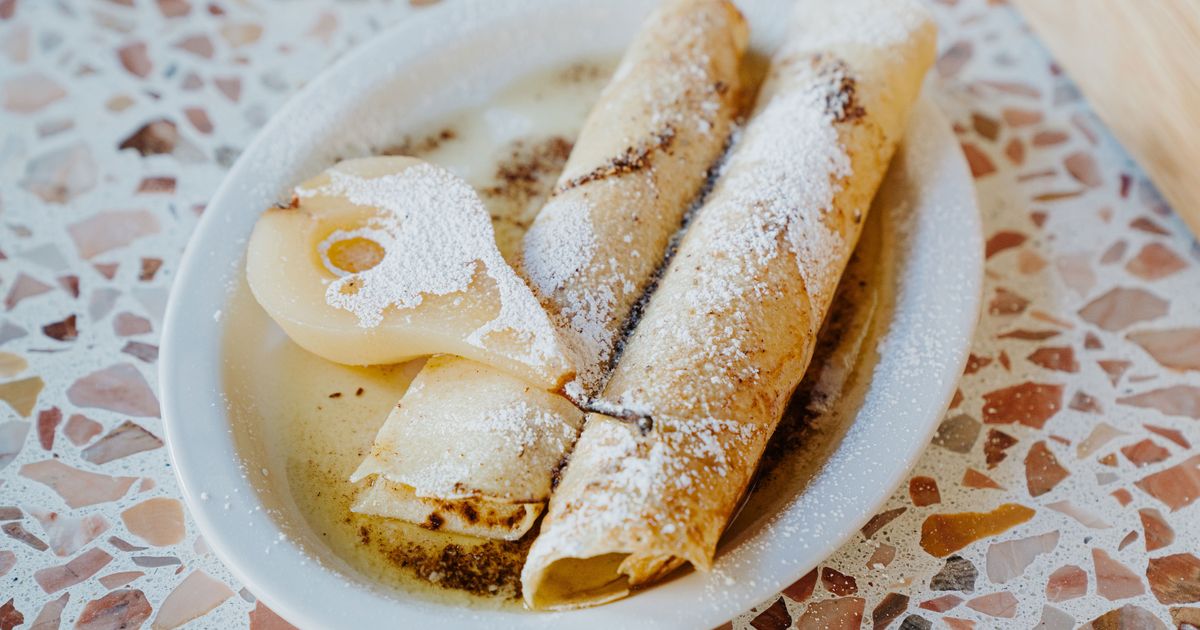 A line of customers stretches out the door and onto Franklin Avenue in Crown Heights. It’s the first Sunday in business for the new café Agi’s Counter, where the food is inspired by Eastern Europe (and, more specifically, Hungary), and the space is packed. Maybe you stop into Agi’s for a cup of coffee, but you haven’t had breakfast yet and the pogača — a biscuit with fried egg and dill — looks too good to pass up, but you switch things up at the last second and go with the sausage. Then you realize you want something sweet, and the chocolate-y Gerbeaud cake catches your eye, but you land on the black-cardamom upside-down pineapple cake instead. When you’re finally ready to leave, you grab a couple of shortbread cookies with caraway that you say you’ll share with somebody else, but you eat them all as you walk away.

Agi, if you’re wondering, is the grandmother of chef Jeremy Salamon, who opened his café after a string of pop-ups. During its first week in business, it felt like the entire neighborhood has stopped in to check it out. Jessica and Trina Quinn are also here on this first Sunday, and they’ve already visited three or four times before. The Quinns serve Eastern Europe food at their own project, Dacha 46, with a heavy influence from Jessica’s ancestral homelands of Latvia and Ukraine. When Salamon walks over to say hello, Jessica pulls out housewarming gifts: a tin of cookies and a box of Ferrero Rocher chocolates wrapped in gold foil. If you are an immigrant or first-generation American, you probably know that these two gifts carry some significant cultural meaning.

The Quinns tell me that as soon as they heard what Salamon was planning, they felt an immediate kinship, and it’s hard to miss the overlaps between Dacha and Agi’s: Hungary shares a border with Ukraine, where half of Jessica’s family originates. They’ve both found success with crowdfunding: Agi’s raised $66,000 from 227 backers, while Dacha secured $45,000 in funding to help secure a commercial space where they plan to launch their catering business and also turn out frozen pelmeni. And both projects demonstrate that there is an audience for this type of cooking that reaches beyond the city’s traditional enclaves.

Jeremy Salamon is the chef and owner at Agi’s Counter.
Photo: Janice Chung

New Yorkers know that Greenpoint is a good bet for Polish cooking; Long Island City has a Romanian population that’s propped up a few butcher shops and other places that bring them a taste of home; if you want Bosnian food then you get to Astoria; and if you want Russian, then you get on the Q and go down to Brighton Beach. Even as the city tends to cycle through various trends pulled from the cuisine of other countries — yakitori, regional pastas, Korean tabletop grilling, countless others — the food from this particular part of the world remained regional, and fans had to travel.

As a territory, Eastern Europe takes up nearly 40 percent of the continent’s land, however it’s difficult to pinpoint what is truly “Eastern European” and what isn’t. Some will tell you it comes down to simple geography. Others might say that countries dominated by Catholic or Protestant churches, like Hungary or Poland, are more Western; while Russia, Belarus, Ukraine, Armenia, and countries where Orthodox Christian churches predominate are Eastern. And when you consider all the changes that have occurred in the region, and all the different groups living there, you can end up in an entirely different conversation. So we can’t say that Eastern European food is trending or having a moment or whatever because what would that even mean? What we can say instead is that the story of Agi’s Counter begins in Hungary, when the real Agi fled during the Hungarian Revolution of 1956, wearing a second-hand mink coat and subsisting on lemons until she arrived in Austria at the Hotel Sacher. “She said for being such a sour journey,” Salamon laughs, “it ended up sweet.”

The leberkäse breakfast sandwich (left) and a selection of pastries. Janice Chung.

The leberkäse breakfast sandwich (left) and a selection of pastries. Janice Chung.

Salamon grew up eating the traditional dishes that people tend to recognize — chicken paprikash, goulash — but after he came across a copy of George Lang’s 1971 book The Cuisine of Hungary, he was inspired to take a trip to Hungary, staying with relatives for three months and learning everything he could. When he returned, he started hosting pop-ups around the city. Eventually, Salamon followed his boyfriend Michael to Los Angeles, and worked out a business plan for his dream space. The one problem was that the idea didn’t feel right for L.A. So the couple moved back east. Salamon next launched his Kickstarter. “I was nauseous the whole time,” he recalls. Once funded, Salamon got to work on the space at 818 Franklin Avenue, which had previously been home to Butter & Scotch, the bakery and bar that was, coincidentally, the first place Salamon hosted his pop-up.

There is something inspiring about the various roads Salamon took to end up back where he started, cooking the sort of food his ancestors may have eaten, even if all is not well in his family’s homeland. This past summer, in what is becoming a frightening trend in the region, Hungarian Prime Minister Viktor Orbán passed a law that bans any content featuring or about LGBTQ people in school material or television shows for people under 18. The law passing came weeks after Czech president Milos Zeman called transgender people “disgusting” in an interview. In Poland, a number of of municipalities have created “LGBT ideology-free zones,” while Russia passed legislation outlawing “homosexual propaganda” in 2013.

The region’s history of discrimination isn’t lost on Salamon or the Quinns. “We talk about that a lot,” says Jessica, who tells me that, growing up on Long Island, she sometimes thought she was the one gay Russian person in the world. Dacha 46 is designed to be a celebration of her identity and her culture, and she remembers a moment when she realized her experience wasn’t entirely unique. “There was a young trans man who brought his grandmother who was clearly born in like the Soviet Union to our pop-up and they were bonding over our food,” Jessica says. “I almost broke into tears — it was the first time where I fully understood the extent of what we were doing.”

A Pogača with egg and cheddar.
Photo: Janice Chung

The phrase “comfort food” means something different for everyone. And while I don’t have the hard numbers to back this up, I suspect that for most people, there is a strong connection to the food that their own grandparents ate or prepared. Sitting with the Quinns at a table in the back of Agi’s, I found myself thinking about my own family’s history, scattered across the region, and why this kind of cooking appears to resonate with so many people right now. The food is delicious, but that’s always been the case — so what’s different at this particular moment in time?

“Eastern Europeans have been training for this their entire lives,” Jessica offers. “It’s our time to shine.” What she’s talking about is … everything: the political unrest, the lingering pandemic, the veritable elimination of an economic middle class. Shit kinda sucks right now, in other words. Put a finger anywhere on a map of Europe’s Eastern half, and you’ll likely land on a place that has, at some point in history, been affected by any of those scenarios, maybe on multiple occasions. It’s a part of the world that’s filled with contradictions and strife and violence aimed at one group, and then another; the cycle doesn’t end.

Nobody knows what tomorrow will bring, of course. When things are tense — and let’s be honest: Things are tense — fear of the unknown can be overwhelming. Even if you’ve never had palacsinta, you can probably find some relief, however temporary, in a sweet, cheese-filled crêpe that’s dusted with powdered sugar. At the very least, it helps take the edge off.