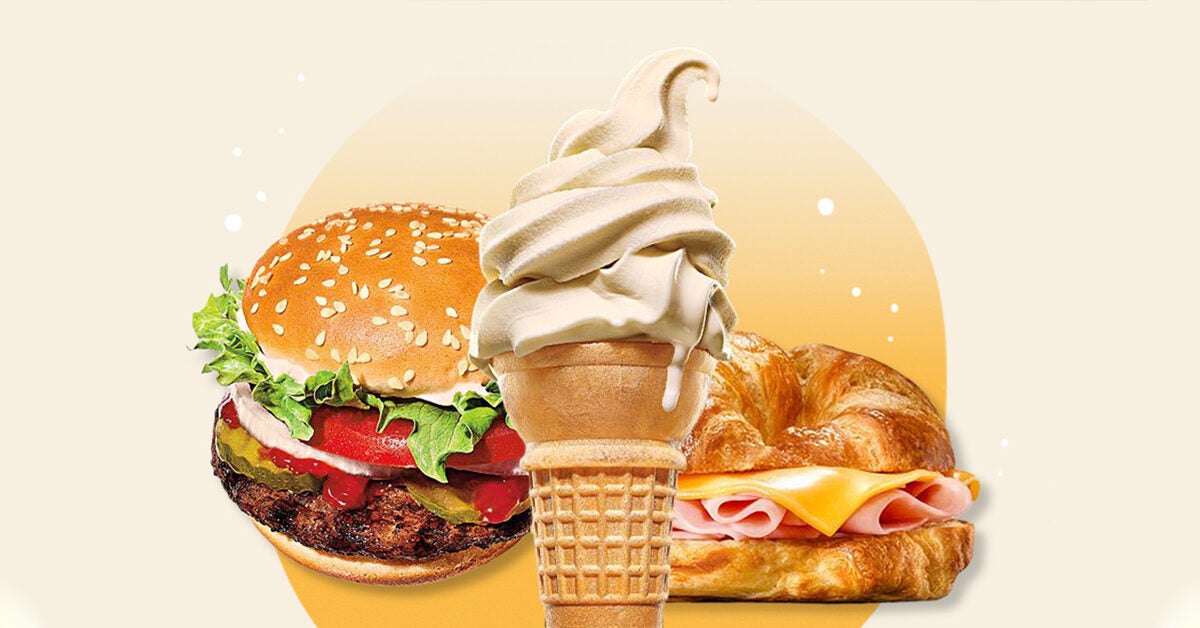 Healthy eating at fast-food restaurants like Burger King can be tricky.

In the past, Burger King offered several healthier menu options, including salads and grilled chicken sandwiches, but these are no longer available. While this is unfortunate, other menu items might meet your dietary preferences.

Although Burger King offers a few healthier breakfast choices, you may want to order a lower calorie side to make your meal more filling.

For example, consider ordering a side of applesauce for an additional 50 calories or a glass of fat-free milk, which adds 90 calories and 9 grams of protein. Protein is great for keeping you feeling fuller for longer ().

While many fast-food orders contain trans fats, which can increase your risk of some chronic diseases, the breakfast suggestions listed below don’t contain any ().

Keep in mind that drinks can add many calories to your meal, so if you’re looking for a low calorie breakfast, opt for unsweetened drinks like water, black coffee, or tea.

Compared with other breakfast items, Burger King’s French toast sticks are low in calories and sodium.

One 3-piece serving of French toast sticks contains just 230 calories and 260 mg of sodium. If you go for the 5-piece packet, the calories increase to 380 while sodium increases to 430 mg (3).

On its own, this 3-piece french toast order contains only 3 grams of filling protein, but you can easily increase this to 11 grams by ordering milk on the side.

With only 250 calories and 2 grams of protein, the hash browns likely won’t feel like a complete breakfast. Thus, this is another choice that can go well with an order of fat-free milk to add some healthy calories and protein (3).

Unlike most items on the Burger King menu, the hash brown contains 3 grams of fiber, which can also help you feel full ().

If you’re looking for a breakfast sandwich, the ham, egg, and cheese croissan’wich is among the lowest calorie options. You can also order it with bacon or sausage.

Still, while it’s a reasonable 370 calories and packs 17 grams of protein, it contains just over 1,000 mg of sodium, so be sure to balance it out with low sodium meals throughout the rest of the day (3).

Although you may not associate fast food with low calorie items, some of Burger King’s options can still fit into a well-rounded weight loss or weight maintenance diet.

However, keep in mind that these options may not keep you feeling full for long, so it’s a good idea to pair them with low calorie sides.

Unfortunately, Burger King doesn’t offer many of these — currently, their applesauce is the main option — so consider grabbing some fresh fruit, veggie sticks, or unsweetened yogurt elsewhere to create a more balanced, filling meal.

The plain hamburger has 240 calories and 10 grams of fat, which is relatively low compared with other sandwiches on the menu.

Plus, with a sodium content of 380 mg, it’s among the lowest sodium options (3).

Toppings, condiments, and drinks can add to these counts, so opt for low calorie sides, don’t use additional sauces, and stick to unsweetened beverages.

If plain burgers aren’t your favorite, adding cheese to make a cheeseburger only contributes just over 40 calories and 3 grams of fat. It does bump up the sodium to 560 mg, but that’s still low compared with many other menu items (3).

Besides extra flavor, adding cheese to your burger also increases the protein content, bringing the total to 15 grams (3).

Just like the hamburger, it’s a good idea to pair your cheeseburger with a low calorie side like applesauce instead of fries or onion rings. Plus, go with unsweetened drinks rather than calorie-packed ones.

Containing only 170 calories, the 4-piece packet of chicken nuggets is one of the lowest calorie menu items (3).

It’s also low in sodium and fat compared with other Burger King meals, with 310 mg and 11 grams, respectively (3).

Burger King has a few different dipping sauces to choose from. To keep calories on the lower end, select ketchup, honey mustard, BBQ, or buffalo sauce, all of which contain less than 100 calories per serving (3).

Although your body needs some sodium for optimal health, most people in the United States get too much of it, especially from premade and packaged foods ().

Too much sodium can contribute to health issues like high blood pressure, so it’s important to keep the recommended Daily Value (DV) in mind, which is set at 2,300 mg or less per day ().

Besides the plain hamburger, the Whopper Jr. is the lowest sodium meal on the Burger King menu, containing 390 mg (3).

Still, keep in mind that condiments can add 75–360 mg of sodium and that most sides will add to these numbers, too (3).

While 390 mg of sodium is low compared with other menu items, it’s not technically considered low sodium according to the Food and Drug Administration (FDA). It’s still best to keep these meals in moderation and only enjoy them as an occasional part of a balanced, whole-foods diet ().

Still, keep in mind that many of the meals from Burger King are high in saturated and trans fats, which have been linked to some chronic diseases, so it’s a good idea to balance these meals with healthier options for the rest of your day and week.

You can order many of the menu items without bread and toppings like ketchup to keep the carb count down.

8. Whopper without the bun

Most of the sandwiches and burgers ordered without the bun will likely fit into a keto diet.

Remember that most toppings and condiments will add not just calories and sodium but also carbs. As such, if keeping the carb count of your meal to zero is a priority for you, you may want to skip them.

Like most of the sandwiches at Burger King, this option contributes a large amount of saturated fat and sodium. The Whopper also contains 1.5 grams of trans fats, so we recommend enjoying this meal in moderation (, 3).

9. Sausage, egg, and cheese biscuit without the biscuit

For a keto-friendly breakfast, you can try any of the breakfast sandwiches without the croissant or biscuit. For example, the sausage, egg, and cheese biscuit without the biscuit is a low carb, high protein breakfast.

If you prefer, the same sandwich can be made with either bacon or ham instead of sausage for the same amount of carbs.

This breakfast also packs 14 grams of protein, which means it can help you feeling full as you start your day (, 3).

10. Bacon cheeseburger without the bun

Ordering the bacon cheeseburger without the bun will decrease both the calorie and carb counts, making it another keto-friendly option.

However, note that because the trans fat, saturated fat, and sodium are mostly found in the meat and cheese, this bun-free option will still be high in both (3).

If you’re looking for a sweet treat, two menu items at Burger King are lower in calories and sugar than others.

For comparison, some of the milkshakes on the menu contain close to 100 grams of sugar. Consuming a high sugar diet has been linked to several health conditions, including heart disease and diabetes, so it’s best to moderate your intake of sweet desserts (3, , ).

The soft-serve cone is just 142 calories and is low in sodium — even by FDA standards — with just 100 mg. That makes it a suitable low calorie option to curb your sweet tooth (3, ).

Still, the cone contains 17 grams of sugar, so be sure to opt for lower sugar meals and snacks the rest of your day (3).

The soft-serve cup is a bit higher in calories, fat, and sodium, as well as sugar, contributing 24 grams (3).

However, it’s still a relatively low fat, low sodium dessert compared with other menu options with its 5 grams of fat and 150 mg of sodium (3).

While eating healthy at a fast-food restaurant like Burger King can be challenging, certain menu items still fit many dietary preferences.

A simple way to keep your calorie intake in check is to opt for calorie-free beverages like water or unsweetened hot or iced coffee.

Keep in mind that even though some menu items might be healthier than others, most meals from Burger King and similar fast-food restaurants are still high in sodium and saturated fat.

As such, it’s best to enjoy these meals in moderation while following a healthy diet and lifestyle.