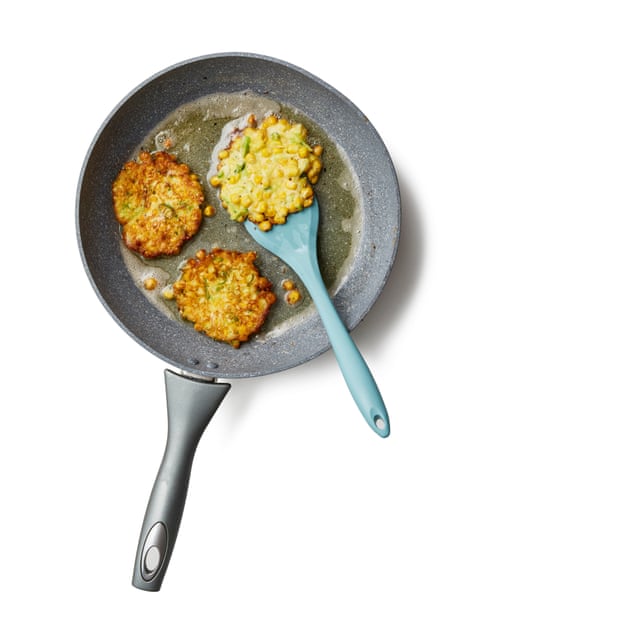 Blazing in at the very last, the song of the summer is finally upon us. Entitled It’s Corn, the song is an instantly catchy, surprisingly heartfelt ode to sweetcorn as performed by a child known as Corn Boy, and it is truly inescapable on TikTok. The lyrics are not only sincerely straightforward (“It’s corn!” it goes. “A big lump with knobs, it has the juice! I can’t imagine a more beautiful thing”) but they also make the listener want to instantly go out and eat as much corn as possible. And for that reason and that reason alone, here are the 10 best corn recipes on the internet.

Let’s start with Felicity Cloake’s perfect sweetcorn fritters from earlier this month. The recipe is worth revisiting for two reasons. The first is that Cloake underlines how important it is to eat corn on the cob as fresh as possible, since the sugars start turning to starch as soon as they’re picked. Secondly, the fritters are spectacular – crisp and sweet and lacy.

In fact, let’s double up on Cloake recipes, because last year she also created the perfect creamed corn. An overlooked dish in the UK, partly because simply gnawing on a cob is such a foolproof sweetcorn delivery method, creamed corn is tremendously comforting and easy to make. Fry a load of corn with some onion, pour in milk and cream, stir it together and you’re done. Beautiful.

Corn grilled in its husk with creamy pecorino dressing

Speaking of gnawing on a cob, you’re not exactly short of variations. My mum’s method – basically boiling them into oblivion – is perfectly fine. But for a little more elegance, Yotam Ottolenghi’s corn grilled in its husk with creamy pecorino dressing is hard to beat. The husk acts as a steamer, trapping the corn’s juices, but the dressing is what really elevates the dish. Sharp (thanks to the lemon juice) and salty (thanks to the cheese and the anchovies), it is perhaps corn’s best possible accompaniment.

Now we’ve covered the basics, let’s take a quick left turn. Andi Oliver’s sweetcorn pudding is the sort of dish that, unless you’re from the American south, might not make much sense at all on paper. It’s a semi-sweet, eggy, creamy sweetcorn casserole traditionally served with chicken. You might need a little momentum behind you to try this one, but I promise it’s worth it.

If you’re feeling particularly bullish about your cardiac health, allow me to introduce you to the Korean side dish corn cheese. It is exactly what it sounds like: a load of sweetcorn suspended in mounds of melted cheese. There are optional flourishes – you can mix the corn with diced peppers, or slather it in mayonnaise, as My Korean Kitchen’s recipe does here – but really you’re just here for the cheese.

Meanwhile, if you’re not hellbent on clattering headfirst towards a nightmare of clogged arteries, here’s Veg Recipes of India’s recipe for corn chaat. It takes a happily loosey-goosey attitude to corn preparation (you can boil it, fry it, whack it in a pressure cooker) and ingredients (serve it with diced tomatoes, or cucumber, or potatoes, or chickpeas, or kiwifruit), but the end result is always wonderfully clean-tasting.

Makai paka is an east-African coconut and corn curry that takes almost no time at all to make. As per Tasty’s recipe, you just blanch your corn, melt some butter, add chillis, spices and coconut milk, then throw it all together. It is a near-perfect weekday dinner.

We could compile a separate list made entirely of various cornbread recipes. Here, however, we will simply stick to African Bites’ mealie bread recipe. Made with a mix of cornmeal and pureed corn, it’s a moist, dense South African bread traditionally steamed in cocoa tins and sold as street food. This recipe is a little different, requiring you to bake it, but it’s delicious, nonetheless.

As Corn Boy rightly points out, corn has the juice. To honour this watertight observation, here’s Growing Up Bilingual’s recipe for atol de elote. It is a Guatemalan corn drink, most often sold on the street at Christmas. As with the pudding above, this has a flavour profile that might sound unusual – it’s cooked in thickened milk with sugar and cinnamon – but it’s delicious.

By this point you have listened to It’s Corn several thousand times, tried all of these recipes, and now find yourself surrounded by several hundred spent corn cobs. Fear not, because the ever resourceful Tom Hunt is here to save the day with his corn cob stock. A bunch of old cobs, some vegetable trimmings and maybe some chicken bones, boiled in a pan for an hour – at the end of it, you’ll have enough flavourful broth to keep the corn party going long into autumn. I can’t imagine a more beautiful thing.