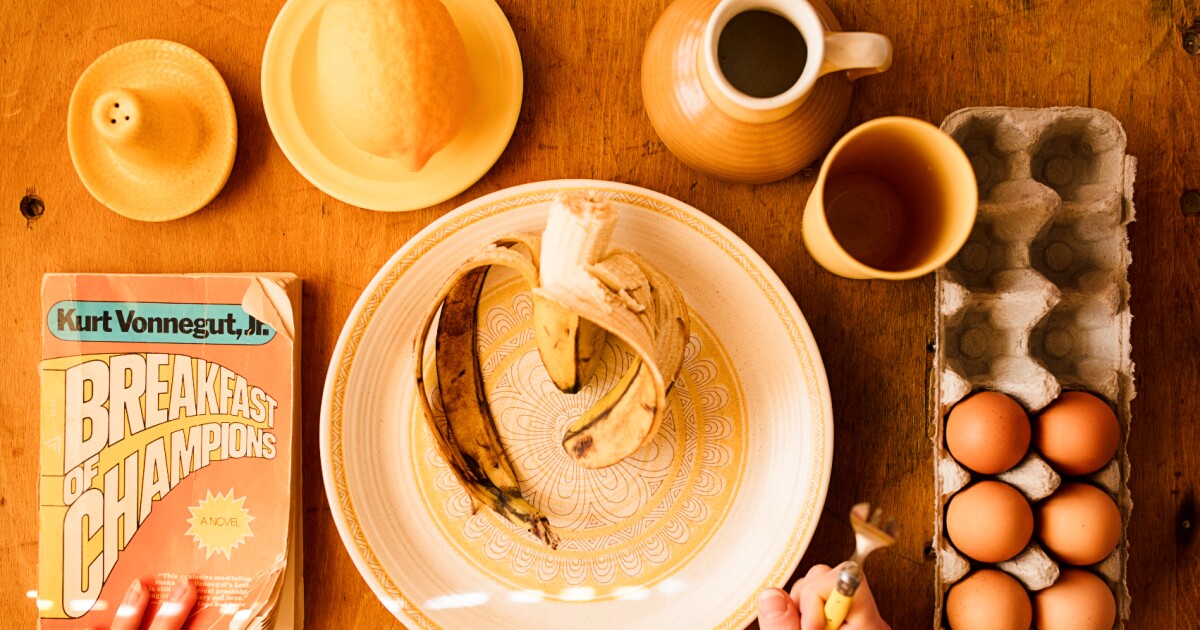 Start your day with LAist

In any proper drinking session, there’s a moment when your head’s a little lighter, when ordinary things seem interesting but they haven’t yet begun to shimmer — the Sweet Spot. When you’re in it, one more drink sounds like a great idea. What’s the alternative? Imagine two doors. Behind one is the exit, back into cold, grey reality. Behind the other lies a beguiling mystery, requiring another drink or three to unravel.

The holiday season warps those doors. The one leading to the exit shrinks like the Grinch’s heart, and the mystery door starts to look like Whoville’s communal Christmas tree. But whatever beauty you discover behind that door, you’ll be paying it back in spades the next morning.

When you wake up on someone’s couch the next day, head pounding and mouth dry, wearing your jeans with the pop-up window on the TV wondering whether you really, really want to go through with the Christmas Prince marathon, you’re going to need sustenance.

Wherever you are on the globe, there’s probably a hangover dish designed to help you out. And wherever you are in Los Angeles, there’s a good chance you’ll be able to score a version here.

As you comb through these global hangover remedies — and where to seek them out in L.A. — you might notice a pattern. Simple carbohydrates + electrolytes + grease. Some dishes wield spice and acid like a culinary cattle prod. Others build you back up on a sturdy, reliable base. Most involve meat.

My own hangovers are terrible things, a somersaulting stomach accompanied by malaise like a struggling midcentury Parisian novelist, so my usual remedy is Tums and Lipography. I don’t recommend it. Likewise the mid-century American remedy chronicled by writers such as Wodehouse, Orwell and Isherwood — the “prairie oyster,” a raw egg doused in Worcestershire.

Instead, we have conducted extensive real-world testing on these global dishes and can say with certainty, they’re more pleasant than prairie oysters and more restorative than OuLiPo.

The United Kingdom and the United States — Bloody Mary

La Cita
Like any classic culinary invention, many claim the Bloody Mary as their own. Some think it was originally mixed in Paris in 1921, others say New York in the 1930s. The cocktail blends tomato juice and vodka with several sauces and spices, usually some Worcestershire, hot sauce, horseradish, lemon and celery amalgamation. The tomato and salt will rehydrate you, the spicy elements will make your eyes pop open and the vodka smooths those rough edges.

You can get a Bloody Mary almost anywhere in town but it’s hard to beat the Sunday brunch build-your-own version at bumping downtown bar La Cita. Options run the gamut, cubed cheese or pickled things, hot sauces and meat, garlic and clamato and well beyond. It helps that the vodka pours aren’t short, either.

La Cevicheria
Open Jan. 1, 2022
The Mexican entry could have included a dozen items built to counteract la cruda. Birria, barbacoa, pozole, chilaquiles, aguachile, micheladas. But none is quite as stirring or evocative as the Veracruz-style mariscos coctel aka vuelve a la vida. It’s not unlike a Bloody Mary with a tomato base sharpened with chiles, onion, lime and cilantro. Avocado adds some healthy lipids while hot sauce provides electrolytes and a jolt. Then, into that heady mixture goes an entire aquarium: shrimp and octopus and squid and snapper and oysters and clams and anything else briny and oceanic you’ve got. The result is a well-earned water bucket dumped on your dirty head.

The version at legendary Mid-City mariscos palace La Cevicheria is outstanding, top quality ocean creatures in a sharp, savory broth. It may not literally raise the dead. It will raise your spirits.

Sol Ma Ru
Open Jan. 1, 2022
As anyone who has spent time in either Korea or Koreatown knows, Korean drinking culture kicks butt. And when your drinking culture kicks butt, your hangover culture better be its boot-to-behind match. Luckily, there’s a whole Korean soup category known as Haejangguk, soup to chase a hangover. There are several variations, generally based on bovine bone broth with soybean paste, usually accompanied by cabbage and some chiles, at the least, and blood cubes or oysters on the maximalist side. This spicy liquid concoction is designed to shock your senses then build you up with hearty meat.

Beyond your go-to KTown gems, Sol Ma Ru, which replaced a Korean chicken joint in La Crescenta, makes a particularly nice rendition. The interior is modern and lux, bordering on clubby, but the ambiance is mellow and the soup is hearty and warming, with a punchy chile kick and big cabbage leaves that lend the whole thing a restorative air.

TNT Aloha
Some traditions eschew spicy broth and lean on richness, dishes meant to land hard in your stomach, absorbing or ejecting anything bad to create a new gastrointestinal baseline. There may be no better base than the Hawaiian specialty Loco Moco: two rice scoops, a hamburger patty, two eggs over-easy, blanketed with brown gravy. The combination is heavy but it’s also nourishing, invigorating and substantial. It may be later than noon, this may be the only time you leave the couch and the only thing you eat today, and it will be enough.

The South Bay is our local loco moco hub, and TNT Aloha may be the cap. They have a whole menu section dedicated to loco moco, with options like house-made Portuguese sausage patties or kalua pork, and it is hard to beat the version with kimchi-studded rice. When you are truly, deeply hurting, the Max Loco comes with three meats, an extra egg, and a compassionate and nonjudgmental nod when it lands at the table.

Petite Peso
In the Philippines, tsilog is the go-to hangover cure, a sturdy plate with garlic rice, meat, eggs and a vegetable. It’s like loco moco, played two octaves higher. Tapa, cured meat, is the most common option although the sweet-savory sausage longanisa and the bacon-adjacent tocino are popular alternatives. As culinary queen Ria Dolly Barbosa, the woman behind the magic at much-celebrated Petite Peso, puts it, “Nothing soaks up last night’s shenanigans like a nice hearty rice bowl.”

At Barbosa’s small but mighty downtown restaurant, she prepares her tsilog with house-made longanisa, tocino, or bistek and serves it with a bright and light tomato salad on the side – the tomato’s rejuvenating power is inescapable. Petite Peso’s rice is just the right texture and pungent with garlic, and those meats are a dream.

Saladang Garden
Open Jan. 1, 2022
Another variation on the theme comes via Thailand, and through Bangkok’s Thai-Chinese community in particular. Khao tom kui is an old school dish, a simple, salty rice porridge like congee or jok paired with sundry sides, maybe an omelet, some garlicky greens, sausage or crispy pork. The theory is similar to tsilog and loco moco. There’s a rice base, some meat, some salt. Clean, classic, soothing and substantial, it’s an easy win.

Right around New Year’s, calm, quiet Pasadena goes totally bonkers. Between the Rose Parade and the Rose Bowl, the city is a party magnet. Those who make the choice to party on New Year’s Eve then attend the parade the next morning have a curative meal close at hand. Saladang Garden makes a better than solid khao tom kui, with the Thai-style omelet kai jeow, black pepper chicken and Chinese broccoli. Their porridge is mild and comes in a gigantic portion, which is just what a hungover human needs.

Old Gyumri
The Armenian tradition is unique and dramatic, centered on a rich and milky broth made by soaking then boiling cow’s hooves over several days. You add garlic and dried lavash as you eat it. According to pitmaster Arthur Grigoryan, who runs III Mas BBQ, it is best paired with mulberry or apricot oghi, a distilled spirit that’s like Armenian moonshine. Grigoryan also notes that khash was originally a peasant dish, created as a way to use undesirable cuts that could be long-boiled into a more appealing dish. He adds that khash is a heavy winter soup: “In Armenia they say khash season begins in the months that end with ‘er’ like October, November and December.”

Because it takes days to prepare and because it’s meant to be eaten with oghi, khash is mostly a home-cooked meal. But there’s a version at lively Armenian banquet spot Old Gyumri, and it comes loaded with garlic and an entire bone. There may not be oghi, but there’s always tarragon soda and the cucumber yogurt drink called tan.

Lucky Boy
Open Jan. 1, 2022
To many Angelenos, there is only one option on a hungover morning — a massive burrito with eggs, potatoes, cheese and bacon. Toss in some avocado or spinach, pico de gallo and beans, maybe change it up with chorizo or imitation meat. As long as you’ve got some good salsa and it can be contained within a jumbo tortilla, there’s something magical about the combination. It can wake you up in the morning or put you to sleep in the wee hours, keep you sated through an entire day or maybe two.

There are so many great options in town, but it’s hard to beat the extravagance and consistency at Pasadena institution Lucky Boy, where you can get their celebrated burrito all day and all night. When I called to ask whether they’d be open New Year’s Day, the guy on the phone said “What is that, a holiday? Yeah, we’ll be open.” Damn right.